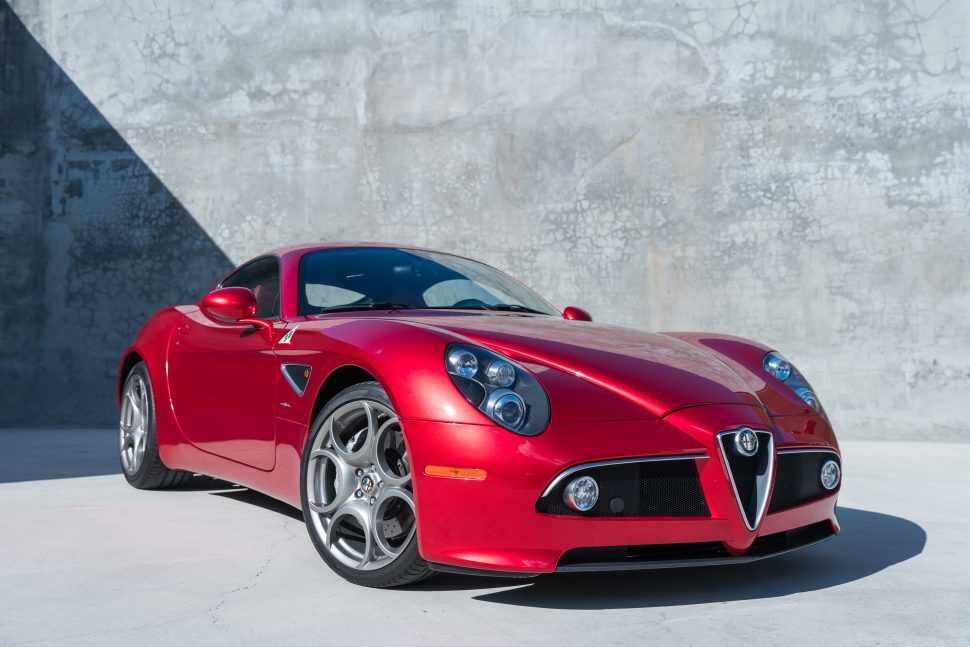 The Alfa Romeo 8C Competizione spawned a new era for Alfa Romeo in the 21st century. Alfa Romeo, who were then manufacturing hatchbacks and sedans which were losing the company money by the boat load, first debuted the 8C concept at the 2003 Frankfurt Motor Show. Under the guidance of the late, great Chrysler/FIAT CEO Sergio Marchionne and after three years of development, the production version made headlines at the 2006 Paris Motor show while responding to the requests of Alfa Romeo enthusiasts since the golden era of the Turin-based company. From then on, it was clear the 8C Competizione would become an all-time favorite amongst the Alfisti.

Wolfgang Egger of the Alfa Romeo Style Center designed the 8C with absolute beauty and power in mind. The distinctive design remains forward thinking and offers a glimpse into the design language of the future Alfas while retaining the DNA of the great Alfa Romeos of past. The inspiration was derived from such post-war greats as the 33 Stradale, Giulia TZ with a nod to the Montreal. The 8C’s unmistakable grille and badge, accentuated by a cluster of beautiful bi-xenon headlights, followed by modern pillarless glass sections, presents it as one of the most gorgeous Alfa Romeos produced.

The Alfa Romeo’s dramatic looks are further enhanced by its exceptional performance. The 8C is powered by a Ferrari/Maserati-derived all-aluminum 4.7-liter V-8 engine that produces 450BHPat 7,000RPM and 347 foot-pounds of torque at 4,750RPM. The engine is mated to the same transmission used in the Ferrari 599 Fiorano, known as the “Superfast” gearbox, a computer-controlled six-speed manual transaxle with a computer-controlled twin-disc clutch. The transmission is placed in the rear for better handling, which is complemented by a front and rear dual wishbone suspension setup. Although admired for its asthetic beauty, the car is absolutely defined by its thunderous and throaty engine note.

The 8C Competizione was built in a limited production run of 500 units and Alfa Romeo originally earmarked the entire production among several specified markets The entire production of 500 cars quickly sold out. The 8C marked Alfa Romeo’s return to the American market in 2008, after withdrawing in 1995. The first 8C was delivered to an Italian customer in October 2007. The first American-market 8C was seen in November 2008, wearing “001 USA” registration plates.

Well known 8C Competizone buyers include film director and stock exchange magnate James Glickenhaus who is also known for being the genius behind the famous Ferrari P4/5 and purveyor of Scuderia Cameron Glickenhaus.

One of the first 8C’s delivered in Europe and the first in The Netherlands was delivered to Dutch Prince Bernhard Lucas Emmanuel.. The late Sergio Marchionne owned both an 8C Competizione and an 8C Spider. Current Chrysler/FIAT President John Elkann also owns an 8C Competizione in a special livery called Blu Oceano, which is part of the Maserati color range. New York Mets player Yoenis Cespedes arrived to the team’s Florida Spring Training with a cherry red 8C Competizione in February 2016.

This Alfa Romeo 8C Competizione (#9680) features a complete host of optional extras, it is fair to say this Alfa Romeo 8C is unique. The 10th of just 84 U.S.-specification cars produced, this example is finished in stunning Rosso Competizione and features nearly every option available for the 8C model. It is presented with a full carbon fiber kit, aluminum-colored brake calipers, leather headliner, car cover, and a premium Bose sound system. It is also one of four 8Cs for the U.S. that features red-braided leather, Alfa Corse fender badges, Marchio Sportivo alloy wheels, and is finished in this particular color.

Dating back to 1923, the Quadrifoglio, Italian for “four-leaf clover”, made its first appearance on Ugo Sivocci’s Alfa Romeo race car at the Tara Florio open-road endurance race. Thus began the deep-rooted history of the Alfa Romeo cloverleaf.

Sivocci’s Alfa Romeo RL bore the four-leaf clover, which he hand-painted on a white diamond background. Aside from the folklore of being a good-luck charm, the cloverleaf was a way for spectators to identify Sivocci on the course.

Fans of the Alfa Romeo racing team were able to identify his car at a great distance, even through the dust of the race track, the Quadrifoglio stood out among the other competitors.

In an unfortunate turn of events, Sivocci had been testing a race car at Monza that did not bear the Alfa Romeo cloverleaf badge. This ended in tragedy as Sivocci crashed the car and ultimately lost his life.

After that day, his good-luck charm became a symbol for uncompromising passion and dedication in the world of international car racing and is forever linked to Alfa Romeo.

Alfa Romeo Formula One cars, which were all now adored with the Quadrifoglio, gained the company’s first Grand Prix World Championship in 1925. The race team then went on to win numerous racing titles, including the coveted Formula One title in 1950 and 1951.

These achievements were a glimpse of the Alfa Romeo racing history but have become an important part of each model that features the Quadrifoglio.