As Lamborghini began to make updates to the Diablo with items like fixed headlights, the engineers and designers in Sant’Agata Bolognese unveiled one last example in 1998 for the American market, the Diablo SV (Spinto Veloce “Pushed Fast”) Monterey Edition.

These unique cars were delivered in special liveries with accents unique from the standard SV.  Different shift knob, side rockers, color coded wing with exposed carbon fiber lip along with unique stitching and Monterey Edition embossed on the headrest.

A 530BHP version of Lamborghini’s famous 5.7-liter V-12 engine produced 20BHP more than contemporary Diablo SVs, making the Monterey Edition the most powerful production Diablo with pop-up headlights.  The more powerful V-12 was also an indication of things to come for the next model year when Lamborghini would boost power to a similar level.

Like other Diablo SVs, the Monterey Edition was rear-wheel drive and sent power to the wheels through a five-speed manual transmission.  Lamborghini had no trouble finding new owners for the 20 special edition Diablos, which were only offered to customers in the U.S.

Some of the twenty cars built were finished in rather strange colors like Lime Green, Pearl Yellow, Verde Scandal and Le Mans Blue, while the very last one, number 20 was finished in Lightning Blue over cream.

The cars were delivered to the USA in time for the 1998 Bull Run led by American racing legend Mario Andretti.  Most of the cars also featured special 18” chrome Kinesis wheels.

This unique car was ordered in a 1 of 1 Blu Scuro (purple metallic) over Yellow interior, with contrasting Purple piping.  It was purchased and owned by its second owner,  baseball star Jason Giambi (Oakland Athletics, New York Yankees, Colorado Rockies and Cleveland Indians) who owned the car for over 15 years.  It comes complete with books, tools, some records and only 14,033 miles. 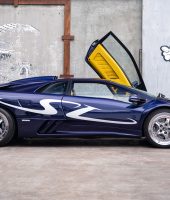 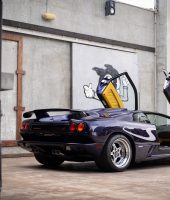 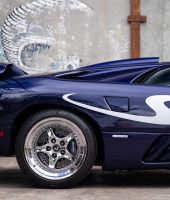 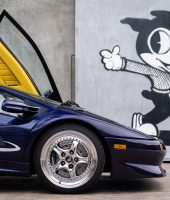 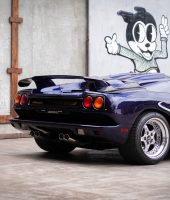 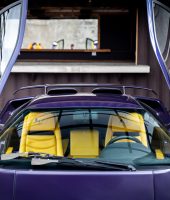 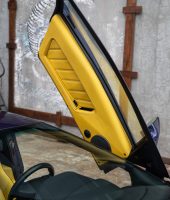