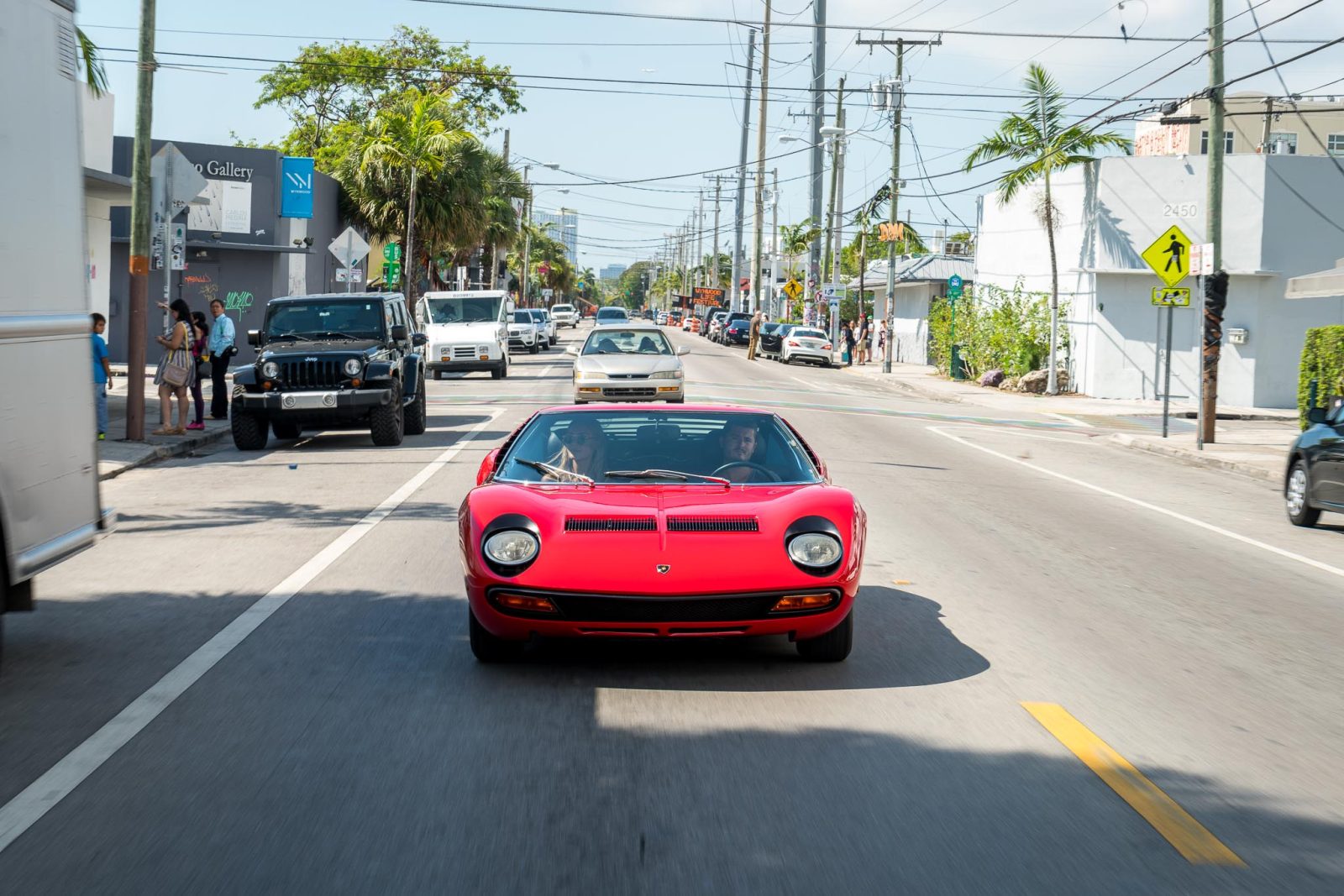 For just under two years we have had the honor to be the steward of a 1972 Lamborghini Miura SV.

The Red and Gold livery Miura SV became a symbol of the Curated brand and a centerpiece of our showroom and collection. It was an honor to be a part of its history, but now it is time to say Goodbye. We have sold our 1972 Lamborghini Miura SV. The car was delivered new at the end of 1972 in South Africa, (check our blog for the full story,) and eventually made its way to Palm Beach, FL in 2001 for the Bonhams Brooks Auction. In 2001, at 16 years old I inspected the car with my father, not knowing I would one day purchase it, 15 years later. After discovering the car in 2015, and deciding against a full restoration, we prepared the very original car for 6 month mechanical and aestetic renovation.

The Miura was not running when we purchased it, and as a result we spent weeks, days, and hours sourcing original parts and working to complete the car. Luckily, my father is arguably the most knowlegble Miura expert in the world, who regularly kept the staff at Lamborghini Palm Beach working till wee hours of the night. Insanely passionate, it is because of my father’s persistence that the car was completed for the 50th Anniversary of the Miura. Having my father personally aide in its completion, and deliver the car to us finished, was incredibly emotional.

In a surreal and impulsive moment, my partners and I decided to bring the car to the world famous Monterey Weekend. Showing it at the Miura 50th at the prestigious Quail Motorsports Gathering and deciding to enter it into the RM Sotheby’s Monterey Auction. As part of the auction the Miura was featured on a BBC segment and numerous periodicals from around the world. We were very optimistic considering the timing of the auction and celebration of the Miura 50th. Miura SV examples rarely trade hands, and at any point there may be 1 or 2 cars available to collectors. Ironically, another very similar Rosso 1971 Lamborghini Miura SV Chassis #4920 was scheduled to be auctioned at the Gooding & Co sale the same weekend. Chassis #4920 was delivered new to the USA, was restored earlier in it’s life and had seen a few cosmetic modifications during its lifetime. #4920 was running the Gooding & Co auction block just before 5pm and ours would be scheduled for around 8pm at RM. Confident in our car, we were excited for the evening’s results. Patiently waiting in a restaurant in Monterey we watched Chassis #4920 SV sell for $2,255,000.

After almost two hours of slowly running a collection of 1960s and 1970s tired Maserati examples, the main event was about to happen. Lot 234 came across the block, arguably the biggest car sold of the Monterey 2016 weekend, the 1939 Alfa Romeo 8C. After a good 5-10 minutes of working the room for a staggering $19,800,000 sale, the room died. Considering our Miura SV was scheduled two lots later… this was not a good feeling. My friends, family, partners and girlfriend watched as the Miura glistened as it pulled onto the stage. The description was read by the lack luster auctioneer and the bids quickly went up to $1,1, $1,3, $1,4 million… $1,5 million. All within 40 seconds. All of sudden after 1 minute and 20 seconds, as if out of a dream, the auctioneer announced “ No more bids? Pass.” Wait… there were other hands in the air! There were other bidders trying to bid… How did our $2 million plus Miura SV only get 1:32 seconds on the block. Quickly, the auction representatives ran over to our area, followed by a BBC film crew and began negotiating price with me. I was in a daze… angry, confused and honestly, sad. I did not want to take any offers, I did not want to negotiate. Our Miura SV should have sold for $2 million and I was bringing it home.

I was offered an apology by RM, I am assuming they realized that the auctioneer had made a mistake. Somehow provoked to rush a flagship car off the stage to make up for a slow evening. To this day, I don’t want to remember the disappointment I heard in my fathers voice upon calling him, I don’t want to remember the look in my business partners eyes, or my girlfriends nervous reassurance, that everything would be “okay.” I knew what the car was, I knew just how original it was, I knew how well it ran, I knew its value.

I really believe everything happens for a reason, and I am an enteral optimist, but the experience was a complete blow. Emotionally, mentally, I was even physically tired. I was not upset that the car didn’t sell, I was upset that such a special car, didn’t get a fair chance. The auctioneer did not work the room, he did not bid the car up to its reserve of $1,850,000 (agreed practice in the auction world,) and imagine, I had turned down numerous offers close or over $2 million. And Yes, the week we consigned the car to RM Sotheby’s we turned down a very good offer through historian Joe Sackey, the author of the Miura Bible. For the next year we took the car off the market and fell further in love with the car.

If you have not seen a Miura SV in person, there is no way to describe its beauty. Most collectors and enthusiast would agree, the Miura, especially the SV example, is the most beautiful car in the world.

One day I was approached by a passionate fellow ex-Miura owner and historian, Mr. Olivier Namache. At first Olivier came across as pushy and overzealous, but over time I realized he was driven by a relentless passion. Olivier mentioned to me he would have a client for our Miura SV. Within the week he explained to me the client was a VIP and the car would be going back to Italy, back to its birthplace, Sant’Agata Bologna, the Lamborghini Factory. After a few weeks and months of discussions with the incredible people of Lamborghini, we agreed the car would shipped to Italy, to be sold to one of their VIPs after a successful inspection at Polo Storico. The morning came when I was told the car had to be delivered to the airport. It was beyond emotional, the car had truly become part of my life. The journey was a testament to believing in “what’s meant to be…” Long and Winding Road.

As I had been certain of, the inspection went amazing, She is one of the more original Miura SV examples left in the world today. We would never disclose the name of the buyer, but he is arguably one of the most significant individuals in the automotive industry from 1990 till now. If there was ever a way to end a story, to finish a chapter, an emotional journey… This would be it.