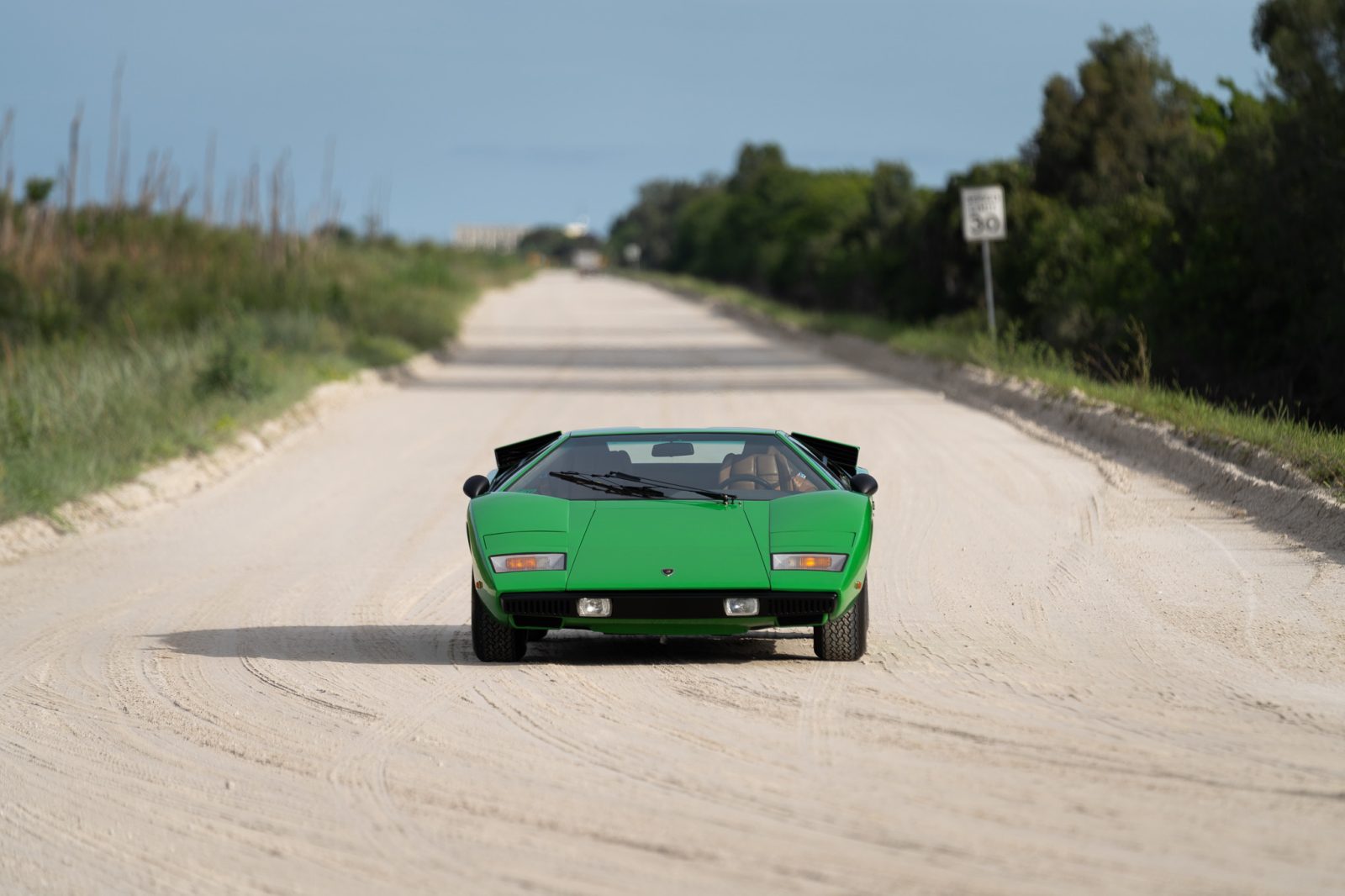 Among Lamborghini’s most dramatic and revered designs is the amazing Countach. Wild, angular, powerful, loud, Italian as a car may possibly be, the Bertone penned Countach is an icon of automotive design setting a standard which has never been surpassed.

The first version of the Countach was introduced to an astounded public at the 1971 Geneva Motor Show as the Lamborghini LP500 concept which was based on the style of the initial Lancia Stratos Zero concept, a futuristic wedge shaped design with dramatic scissor doors which more closely resembled a space capsule than a car.

Faced with competition in the form of the Ferrari Daytona and Porsche 911, Ferruccio Lamborghini needed a ground breaking successor to the aging Miura design and he selected Chief Engineer Paolo Stanzani to begin work on the new project called “LP112”.

The “LP112” team created three pre-production prototypes the first of which was the 1971 Geneva show car and pressed into service as a test and development car.  The car was close in appearance to Gandini’s original design but as development continued, new air inlets and subtle tweaks began to appear, mostly related to keeping the engine cooled.

Thus, “LP112” cars began appearing with ever larger air inlet boxes aft the cockpit structure atop the wheel wells and large NACA ducts stretching from the scissor front doors into the rear quarter panels along with a series of vents and slats all designed to push air into the engine compartment.

With each iteration of “LP112” test cars, the latest development test car would roll out at the Geneva Motor Show in successive years 1973 and 1974, each prototype arrived with subtle changes and improvements derived from miles of testing until appearing in the form given the name LP400 or Periscopio (Periscope) for the small periscopic slot for the rear view mirror artfully cut into the roof to aide in rearward visibility which was virtually non-existent.

Orders for Lamborghini’s futuristic new Supercar flooded in to dealers based on the buzz the cars created at the Geneva Motor Show.  Lamborghini had a hit on their hands before the cars even went into production with an MSRP of $52,000.00.

The LP400 cars finally went into production in 1974, the first of which appeared with 3.9 liter V12 engines which developed 370BHP and reputed to have a top speed of 200MPH but revised to 179MPH once in the hands of journalists.  Some more subtle changes differentiated the production cars from the prototypes such as more conventional rear lights supplanted the futuristic light clusters of the prototypes.

The LP400 cars also had rather narrow tires which are quite correct for the time.  The effect of this is reduced drag especially compared to later versions of the Countach which featured ever wider tires with matching elaborate body work, flared wheel wells, running boards and wings which would create additional weight and drag.

Thus, to many Lamborghini purists, the original LP400 version of the Countach represented Gandini’s vision in the purest form.  A car of such unique shape and character that it could hardly be imitated, an all hand-made alloy body on tubular space frame chassis void of all the add-ons which began appearing on the later versions with only 158 made and therefore the most desirable and collectible to discerning enthusiasts.

Lamborghini produced the Countach LP400s from 1974 to 1977 until being supplanted by the LP400 S series which started to see the addition of flared wheel wells, snow plow air dams and wings.

This Lamborghini Countach Periscopio (#0008) was the first customer LP400 supplied to a dealer.  Completed at the factory on June 26th, and delivered on July 3rd, 1974 to Lamborauto, Torino, Italy (which is still in operation to this day as a Ford dealership) the car is fitted with prototype suspension and seats making it one of the rarest of the rare Series I examples produced.

Put bluntly, the car is a showstopper having appeared in a feature in CAR Magazine in 2004 and winning class merit in the important Autoclasica event in Buenos Aries, Argentina in 2013.  Organized by the Club de Automoviles Clasicos (CAC), of Argentina, the Autoclasica event is the largest of its kind and hosts a display of over 600 best of the best cars from South America.

Sometimes, a car comes along that is so special and unique that it almost defies belief, almost like creating a fine piece of art.  This Lamborghini Countach LP400 Periscopio ticks all the boxes.  With suspension and seats which were on the original prototypes and being the first customer delivered example, this example falls between prototype and customer car making it one of, it not the, most unique LP400 Countachs anywhere.