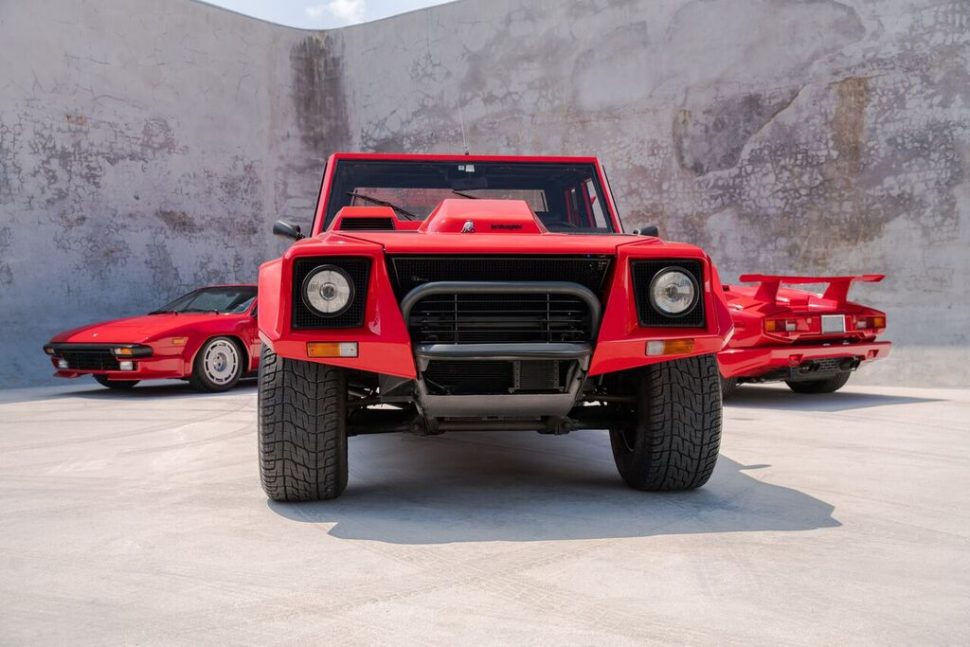 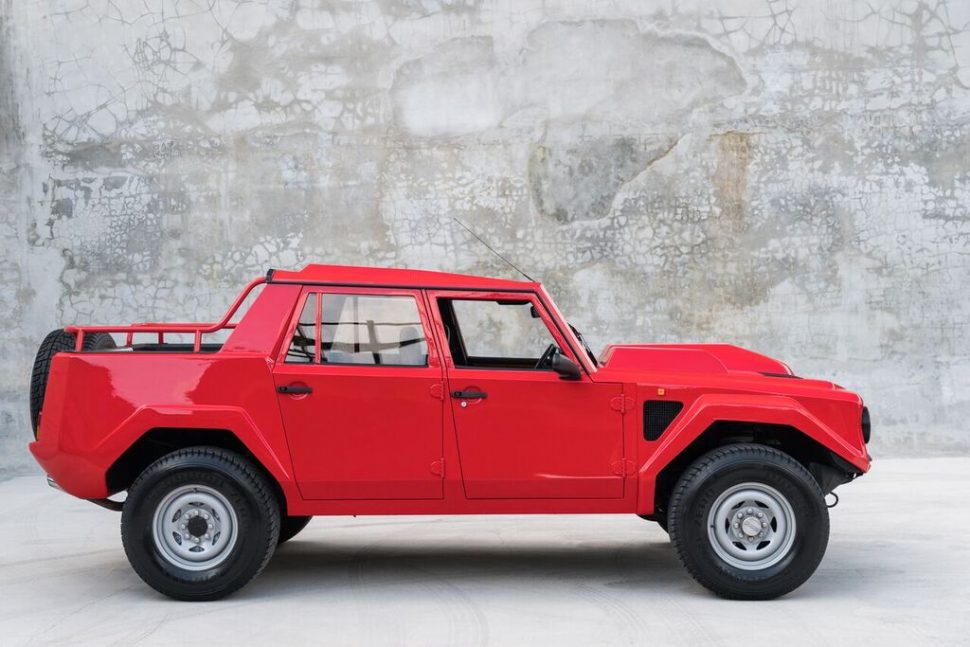 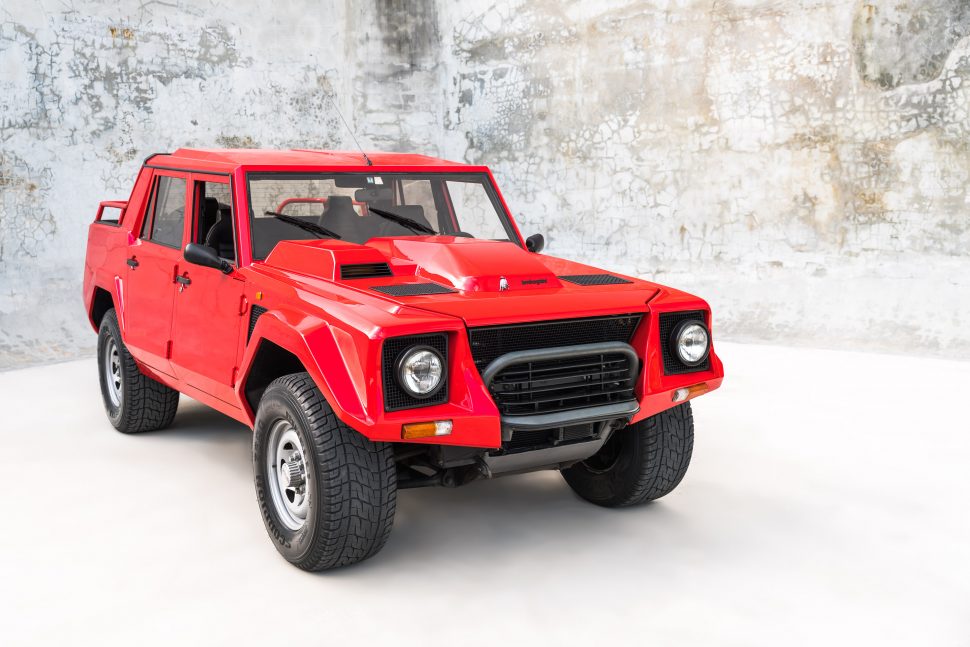 Among the most popular and curious items that has ever landed at Curated has to be the 1989 Lamborghini LM002, the first of the purpose-built trucks (pre-dating SUVs) produced by the Sant’Agata Bolognese, Italy-based sports car manufacturer famous for Supercars such as the Miura and Countach.

Built from 1986 to 1993, the Lamborghini LM002 is thought by many to be the predecessor to the more commonly seen Hummer which has its roots with the American military, notoriously making its first appearance under fire during the 1990 invasion of Kuwait.  And, much like the Hummer the LM002 began life as a military light truck designed for the Italian army, the LM designation standing for “Lamborghini Militaria” (more commonly referred to as “Rambo Lambo”) to compete with Land Rover, Jeep and the emerging luxury SUV segment.

There were two prototypes produced by Lamborghini, the Cheetah and the LM001, both of which used rear-mounted Chrysler V8 motors likewise for military use which were not well received.   The Cheetah and LM001s were deemed too unruly to drive with their big American V8 motors mounted in the rear making them very unbalanced and difficult to handle.

Lamborghini took over the project with an all new chassis and placing their famous Countach V12 Downdraft engine in the front and becoming the LM002 which was publicly revealed at the Brussels Auto Show in 1986 where it received the “Rambo Lambo” moniker by attending media.

In civilian guise, the LM002 comes complete with luxury touches such as full leather interior, air conditioning, power windows, premium sound systems controlled by in the roof-mounted console creating it a bit more of a comfortable and entertaining ride for drivers and passengers.

Pirelli was commissioned to produce the massive, specially made Scorpion 345/60 R17 tires with two different tread patterns, for off road sand and mixed use.  The tires also feature run flat technology which enable them to run virtually flat in the hot desert sands and over the road.

Lamborghini actually had plans to take part in the Paris-Dakar event in 1988 with the LM002, going to far as to hire a team of engineers to lighten the vehicle where ever possible and upgrade the suspension and frame in order to handle the punishment that desert raid races give the cars.  Unfortunately, funding ran out before the team lead by driver Sandro Munari could take part in Paris-Dakar, but they did participate in other desert raid events, which were gaining in popularity at the time, such as Rally of the Pharos in Egypt.

The thirsty LM002 gets about eight miles per gallon and features a seventy-two gallon fuel tank, requires four gallons of engine oil and four gallons of engine coolant.  So, for those wishing for fuel economy and making a light environmental impact from the 5.2 liter V12 engine in a package weighing 6,780lbs, perhaps best to look elsewhere.

In all, Lamborghini built 328 LM002s over seven years.  So, they’re pretty rare items usually only seen at exotic automobile events and rarely on the road.  Performance in a vehicle this heavy, the 48 valve V12 producing 444BHP, far more than segment competitors Land Rover or Jeep, acceleration from 0 to 60MPH is 7.7 seconds with a top speed of 118MPH.  Of course, if the plan is to drive at this pace, count on emptying that big gas tank in a matter of minutes.

This 1989 Lamborghini LM002 (#12148) came to us from the Netherlands as these vehicles far more commonly found in Europe as the few in the U.S. remain under wraps and very difficult to find.  12148 also has signs of spending time in Saudi Arabia (Arabic writing on the VIN plate) and Japan.  The LM002 arrived at the Curated showroom on June 19, 2018 after a flight across the Atlantic Ocean and landing in Miami.

The LM002 is as impressive as any we’ve seen.  It shows just 15,430KMs (9,597 miles) on the odometer.  The interior is spacious but spartan as it’s controlled mostly with push buttons which control the cabin climate and windows with a lot of inlaid wood accents.  The manual gear shift is found in its normal place in the center console and two other shifters which control the four wheel drive are located right alongside the driver’s seat.

The black leather seats hold four adults comfortably in the cabin.  On the back end, an improvised tail gate which also holds the spare tire and wheel opens into a “rumble seat” like set up which includes a locking trunk and where the fuel fill is located and two jump seats which are just big enough to hold two children or small adults, although not likely encouraged.

As a curiosity, the Lamborghini LM002 may be as an intriguing a vehicle as has ever been made.  From the day it arrived at Curated, it has attracted a lot of interested passers-by to see it up close, take pictures and ask about what it is.

As a collectible automobile, the LM002 ticks all the boxes, rare, hand-made, V12 engine and a virtual template for military type light duty trucks and SUVs far into the future and rising values in the market which may not be said for too many SUVs these days.

See this incredible machine at Curated showroom in Miami today. 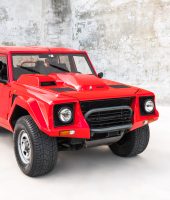 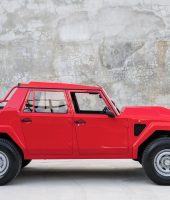 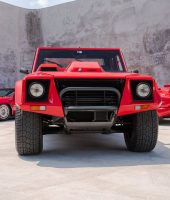 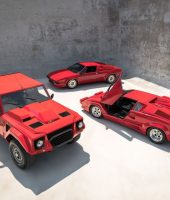 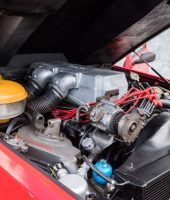 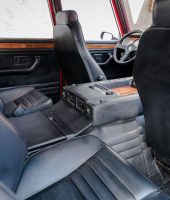 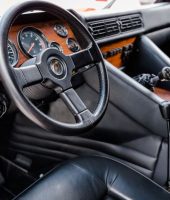 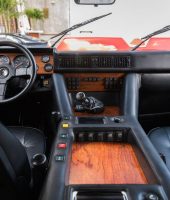 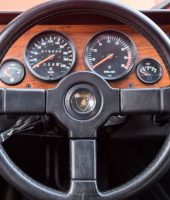 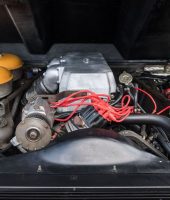