The Lamborghini Countach completely shocked the world. In my biased opinion, the Countach was the car that led the way for every super, hyper and mega-car built since its inception in 1971. The hand made crude Italian supercar has been associated with rock stars, athletes, monarchs, sheikhs and is the ultimate expression of 1980s pop culture. In the past year Countach prices have doubled. Maybe even tripled…

If there is one thing I know about, it’s the Countach. I have been passenger in over 60 examples, helped repair 40 and driven close to 20.

In late August of 2014 we acquired a 1987 example in Black and Gold livery. Not the rarest of all Countach cars built, it was a later Quattrovalve specification car. I have watched 1986-1989 USA Fuel Injected cars struggle to sell for years. I have to say that these are the least desirable of the Countach models. They are the largest production made and unless modified all have ugly USA DOT bumpers. 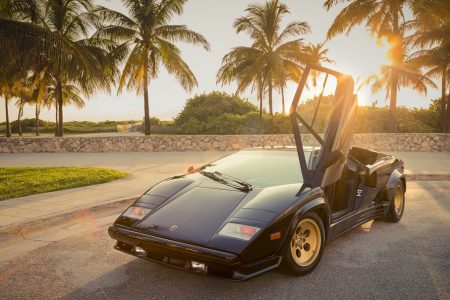 That aside, this was one of the nicest original 1987 cars I have seen. Original paint, original interior and very well maintained over the past 20 years. I spent about two weeks making sure everything worked, removing the catalytic convertors and installed an original 1987 circa Alpine cassette player. Finding a Countach like this… is not easy. Most Countachs were driven hard, not maintained and abused by their former drug lord/rock star owners.

In the past three months the Countach investment perception and their value has actually taken a beating. Numerous cars were “NO SALE” at the Monterey Car Weekend auctions and tons of Countachs sit on the market for sale. What dealers, uninformed collectors and speculators don’t see is that they have flooded the market with poor quality cars and created asking prices that have no justification. In addition 90% of the cars on the market and cars that are not selling happen to be 1989 Lamborghini Countach 25th Anniversary in Red over Tan. The 25th Anniversary represents 60% of the entire Countach production. This is a car that cannot be compared with any of the other examples.

At the end of the day, due to low production, cool factor and the growing market of worldwide collectors, The Lamborghini Countach will always be a great investment. I will continue my rant about Countach models and collectability as time goes on… So keep watching the blog and our site. Prior to buying one reflect with advisor that really knows their stuff or read my Countach Scale of Importance.