The 488 Pista is powered by the most powerful V8 engine in Ferrari’s history and is the company’s special series sports car with the highest level of technological transfer from racing.  In fact, the name meaning ‘track’ in Italian, was chosen specifically to testify to Ferrari’s unparalleled heritage in motor sports.

For over 25 years, Ferrari SpA has been organizing the most prestigious of all one-make championships, the Ferrari Challenge, in which over 100 drivers split into three continental series do battle at the wheel.  Last year saw the introduction of the 488 Challenge, the first model in the series to be equipped with a turbo engine.

The Ferrari 488 GTE is also the car fielded in the FIA World Endurance Championship, the pinnacle of GT racing, where it has won two consecutive GT Manufacturer’s titles and no less than five titles in total since the championship’s inception in 2012.  Thanks in no small part to wins in both the Pro and Am categories, the 488 GTE has won thirty-five out of the fifty races run to date including the 2019 24 Hours of Le Mans where the A.F. Corse team scored a resounding victory in the GTE Pro category.

Technically, the Ferrari 488 Pista encompasses all of the experience built up on the world’s circuits by the 488 Challenge and the 488 GTE.

Ferrari unveiled the 488 Pista at the Geneva Motor Show on 6 March 2018.  The Pista’s design was influenced by the 488 GTE and 488 Challenge race variants.  The car has received many mechanical and exterior modifications to make it more capable than the 488 GTB.  The 3.9-liter twin-turbocharged V8 engine now generates a power output of 710BHP at 8,000RPM and 770 Nm (568 lb⋅ft) of torque at 3,000RPM due to the use of new camshafts, a larger intercooler, strengthened pistons, titanium connecting rods and Inconel exhaust manifolds in the engine, also seen in the 488 Challenge.

Revisions to the 7-speed dual-clutch transmission also allow for shifts in 30 milliseconds when drivers enter race mode.  The most noticeable exterior changes for the Pista are at the front end.  Air passes through the ducts in front bumper and which direct it through a large vent in the hood, which creates more downforce over the nose at high-speeds.

Helping boost performance further, the air intake tunnels have been moved from the flanks to the rear spoiler to optimize clean air flow.  Other exterior changes include underbody diffusers and the rear diffuser shared with the 488 GTE.

In total, the car generates 20% more downforce than the 488 GTB.  On the interior, carbon fiber and Alcantara are used throughout in order to reduce weight.  Overall, the car is 200lbs lighter than the 488 GTB due to the use of carbon fiber on the hood, bumpers, and rear spoiler.  Optional 20-inch carbon fiber wheels available for the Pista save an additional 40% of weight.

The car also incorporates a Side-slip Angle Control system having an E-Diff3, F-Trac and magneto rheological suspension to improve handling at high speeds.  These modifications enable the 488 Pista to accelerate from 0–100 km/h (0–62 mph) in 2.85 seconds 0–124MPH in 7.6 seconds and give the car a maximum speed of 211MPH.

This 2019 Ferrari 488 Pista (#2740) comes in Rosso Dino with offsetting nose to tail white and inset blue stripe with equally impressive blue and black leather, alcantara and carbon fiber interior and is fully optioned. 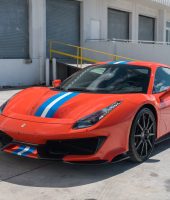 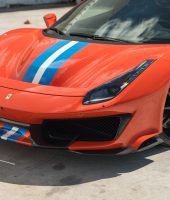 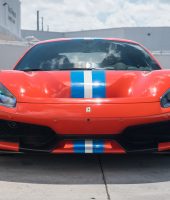 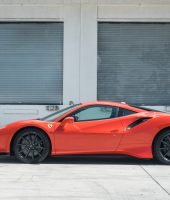 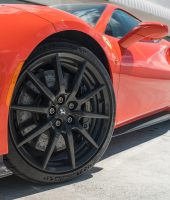 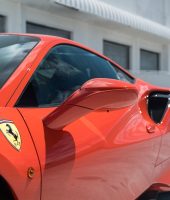 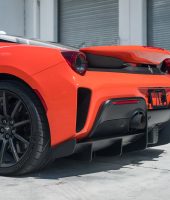 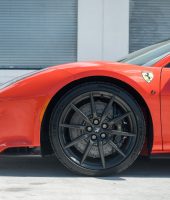 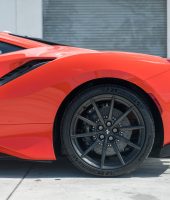 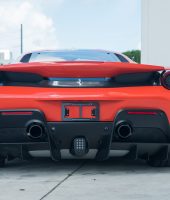 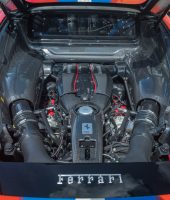 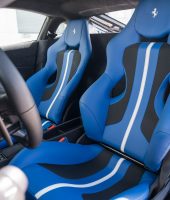 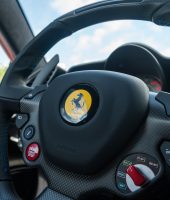 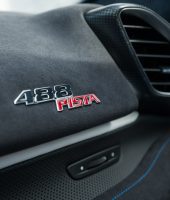 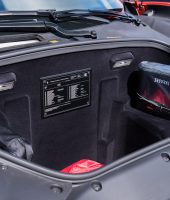 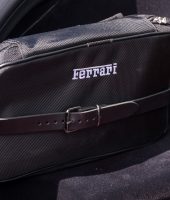