One Off Lamborghini 6-Speed Manual 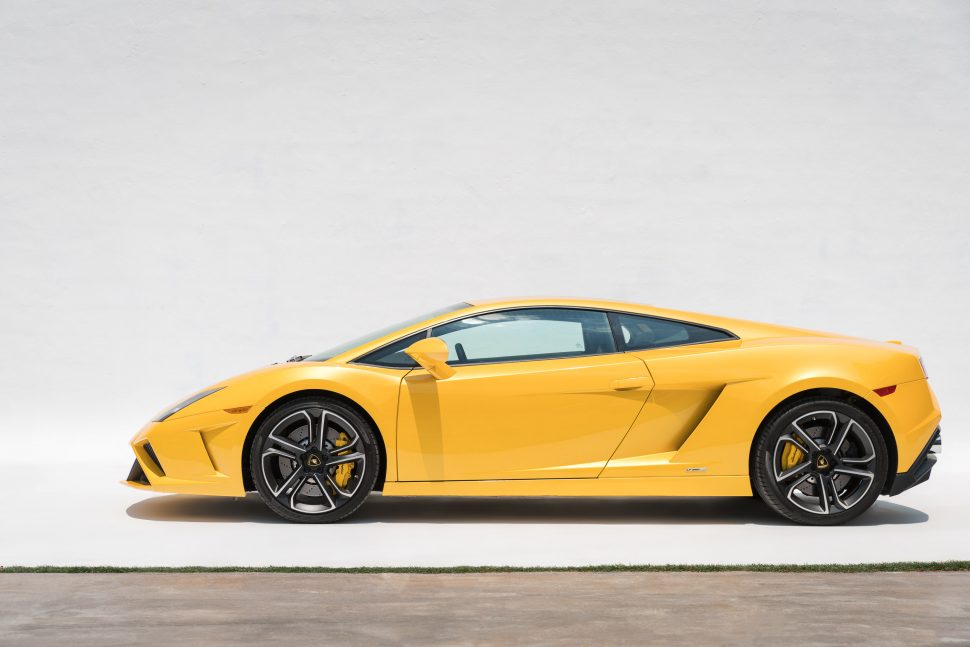 The beautiful Gallardo was Lamborghini’s entry level car from 2003 until 2013.  The Luc Donckerwolke designed V10 baby Lambo was a huge hit and represents the best-selling model in the history of the Sant’Agata Bolognese company as a total of 14,002 were built during their ten year production run backing up V12 bigger brothers, Murciélago and Avenator, while commemorating the company’s 50thAnniversary.

Among the amazing successful run for the Gallardo, several (okay, let’s face it, nearly thirty) special and limited editions appeared with subtle tweaks, everything from Spyders, to police cars to Superleggeras to GT3 racing cars and even one named after our friend Valentino Balboni, appear in different configurations, colors and performance packages.

Ultimately, the Final Edition Gallardo version was the LP560-4 which made its debut at the 2008 Geneva Motor Show. The LP560-4 featured the recognizable angular aerodynamic shape and new 5.2 liter V10 engine that produced 552BHP and subtle aero and ergo tweaks inspired by the Murciélago and Reventon penned bydesigner Walter da Silva who had the honor of crafting the model’s final iteration.

The engine also features the Audi Sport-inspired Iniezione Diretta Stratificata (direct fuel injection) to help fuel mileage and emissions while increasing power output.  The racing derived technology is a variation on the concept of gasoline direct injection which maximizes both power and fuel economy at the same time.

With nearly 40BHP more than the previous Gallardo, Lamborghini offered the LP560-4 with the choice of E-Gear transmission or a standard manual 6-speed mated with the all-wheel drive system, what Lamborghini calls the “Viscous Traction System”, contacting the ground with 19” aluminum wheels shod with Pirelli P-Zero 295/30 ZR 19 tires in the rear and 235/35 ZR 19 in the front.  In all, with weight reduction and increased power from the engine, performance increased as the car launches from 0-60MPH in 3.7 seconds and 0-120MPH in 11.8 seconds and a top speed of 202MPH.

The elegant chassis and body design continues into the cabin where a sparse but thoroughly ergonomic interior envelopes driver and passenger comfortably with a minimum of fuss, with everything right where it should be.  Toggle switches which sit just under the entertainment, navigation and information system, control the various electronic components such as windows, interior and exterior lights and fuel cap all on a concise line across the center of the dash.

Both driver and passenger may manage their own comfort with the dual zone climate control system for air conditioning, fan level and heated seat settings.  On top of the dash, three analog dials monitor oil pressure, oil temperature and battery output.  There is even a small stash box built into the dash just to the left of the steering column where the driver may stow away valuables.  It’s all so civilized that it belies the growling 552-horse V10 engine that sits under the rear bonnet which, oh by the way, is illuminated with an LED lighting system so it’s visible under the tempered glass in the dark.

Our Gallardo LP560-4 (#13327)is a very special and quintessential Curated car.  First, even within a limited production run, this car outdoes itself in gorgeous Giallo Midas, a type of pearlescent yellow, the car was the only LP560-4 done in this shimmering color and features matching color brake calipers and yellow stitched Nero Perseus leather interior, it is absolutely spectacular under the Miami sun.  Secondly, the car is one of the few (and last) with 6-speed manual transmission produced by Lamborghini.  So, for those who think real exotic car driving is done with a manual stick shift and not the more commonly used E-Gear paddle shifters, this is the Gallardo for you.

The Final Edition LP560-4 has to be one of the most spectacular Gallardos made.  And, as one of, if not the, Final Edition cars it has a special place in the Lamborghini world, has had two owners from new, spent most of its life in the northeast, has a clean CarFAX and is showing just 6,562 miles.

Inquire About One Off Lamborghini 6-Speed Manual