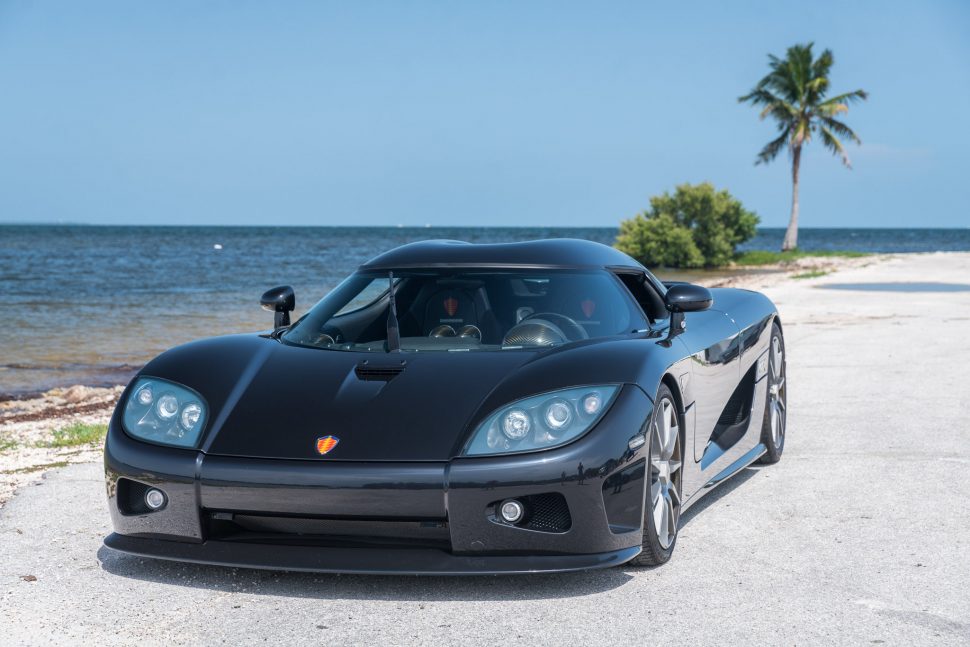 In the Supercar and Hypercar world, Koenigsegg is one of the newer and more high-profile companies to successfully throw their hat into the arena to take on the likes of Ferrari, Lamborghini, Porsche, Pagani and McLaren at their own game.  Founded by Christian von Koenigsegg in 1994 and based in Angelholm, Skane County, Sweden, Koenigsegg set about launching the “Koenigsegg Project” which eventually became Koenigsegg Automotive AB.

The initial concept design of the CC was done by industrial designer David Crafoord utilizing Christian Koenigsegg’s own design guidelines.  The prototype set the foundation of Koenigsegg Automotive AB and by 2002 Koenigsegg produced the first of their world class street legal sports cars the CC8S.

Koenigsegg develops and produces most of the main systems, subsystems and components needed for their cars in-house instead of relying on subcontractors.  At the end of 2015 Koenigsegg had 97 employees, with an engineering department of 25 engineers led by the very hands-on founder.

A novel idea of Koenigsegg is triplex suspension, a rear suspension system used in current Koenigsegg models that allows for maximum comfort and straight-line speed.  It uses a transversely-mounted shock-absorber that connects the two rear wheels as well as independent suspension systems for each wheel..

Another innovation that the company is pursuing is free valve technology that uses electronics and air-pressure to actuate intake and exhaust valves.  This provides very high precision and unlimited timing control, instead of the traditional camshaft technology for their cars, allowing for engines to be much more efficient by reducing weight and size of engines and independently controlling each cylinder allowing for more complete combustion.

Production of the CCX began in 2006 and made its debut at the Geneva Auto Show featuring an all original engine created in-house with the goal of developing a car to be homologated for use worldwide, and in the United States in particular where earlier CCs could not be imported due to strict pollution control standards.

In order to sell cars in the U.S., Koenigsegg had to make alterations to the design of the car to be within U.S. DOT safety regulations.  Likewise, the previously used Ford Modular engine was replaced by Koenigsegg’s in-house developed 4.7 liter twin supercharged V8 motor designed to run on 91 octane fuel and meet California emission laws.

The name CCX stands for Competition Coupe X, the X commemorating the company’s tenth anniversary for completion and test drive of their first CC in 1996.

The engine is of all aluminum construction, made out of 356 aluminum with a T7 heat treatment to further enhance block integrity and cylinder bore chill during casting. Specifically created and cast for Koenigsegg by Grainger & Worrall, a casting specialist with Formula One experience in drivetrain components, the engine was built, assembled and tested at the Ängelholm production plant.

The engine is lubricated with a dry sump system with a separate oil pump and the pistons are cooled by means of an internal cooler that sprays oil onto them in order to run high cylinder pressure with 91 octane fuel making it capable of 14MPG U.S. city and 18MPG U.S. highway.  Available transmissions are a 6-speed manual and a 6-speed sequential manual transmission.  Power is fed to the wheels through a torque-sensitive limited slip differential.

The chassis is made from carbon fiber reinforced with kevlar and aluminum honeycomb like the previous models.  While the body keeps the removable targa top body style and the dihedral synchro-helix actuation doors,  it is completely reworked.  There is a new front bumper design, enhanced brake cooling, fog lamps, U.S. patented head lamps, a new fresh air intake on the bonnet that acts as ram air booster, air intakes behind the front wheels to enhance airflow and a glass window over the engine.

The CCX has a flat underside with venturi tunnels at the rear and an optional rear spoiler to improve downforce.  At 124MPH there is 130lb of downforce over the front axle and 143lb over the rear.   The car is 3.5” longer than the CC to comply with the U.S. rear impact regulations and to free space around the rear muffler.  On the interior, there is 2.0” of extra headroom as well as specifically designed Sparco carbon fiber seats.

Anyone who has seen the Koenigsegg doors open and close, must wonder to themselves, how do these things work?  The doors open out away from the body and then rotate upward.  The system is a Koenigsegg design called the Dihedral Synchro-Helix Door Mechanism (DSHDM) which is essentially a system of gears and struts which push the doors away from the body by 15.7” and then upward.

So, while the doors are not the “Scissor” type as seen on Lamborghini Countach, Diablo or Murcielago models which raise far above the car’s roofline, the CCX does require a wider birth in a typical parking garage, best give yourself nearly forty inches all round just to be safe.  Likewise, the fore portion of the door does require nearly four inches clearance from curbs.

Sports cars typically have large doors to help with ingress and egress.  Large doors mean plenty of space is needed to open them without hitting another car.
Companies have tried different solutions over the years with varying degrees of success.  Scissor doors open high and can be difficult to reach when the occupant is seated.  Likewise, gullwing doors that are hinged from the roof can open too high to reach for many.

Koenigsegg’s DSHDM was revolutionary when it was first conceived and remains unique in the automotive industry to this day.  The door motion allowed by this hinge mechanism – sweeping outwards and upwards at the same time – is every bit as practical as it is beautiful.

The door opens high enough to avoid most curbs, but low enough to avoid garage ceilings.  It also minimizes the space taken to side of the car, which makes opening a large, sports car door into the side of another parked car a thing of the past.

With the arrival of the new Koenigsegg Regera, the mechanism has now been fully robotized.  The door sweeps open automatically at the press of a button, bringing a heightened sense of elegance and theatre to the beginning of every new journey.

First in the industry carbon fiber wheels are optional equipment, 6.6 lb lighter than the standard forged alloy telephone-dial wheels, both using center locking nuts.  Diameter is 19” at the front and 20” at the rear equipped with 255/35 Y19 front, 335/30 Y20 rear Michelin Pilot Sport 2 tires, 8 piston caliper carbon ceramic brakes measuring 15” in diameter at the front and 6 piston caliper 14.3” at the rear are optional, saving another 4.4lb of unsprung weight.

The badge that identifies the Koenigsegg company brand was conceived by designer Jacob Låftman.  It is a shield based on the Koenigsegg family’s own coat of arms dating to the 12th Century CE featuring red diamond shapes over a yellow field framed in blue.

After Koenigsegg moved its factory and R&D facilities to an abandoned airfield near Angelholm which once housed the Swedish Air Force’s “Johan Röd” squadron, the “ghost symbol” that the squadron had on their Saab AJS37 Viggens  planes was adopted by Koenigsegg.  The squad also used the English phrase “The show must go on” on their aircraft as well as a tribute to the squadron.  This logo is seen on many of the car’s models, including the CCX, Agera, Agera R, One:1, and Regera.

As the centerpiece of an impressive collection, this CCX was always stored in a climate-controlled environment and has never seen the elements.  The 4.7L 806HP Twin-Supercharged V8 is an impressive motor is fully U.S. EPA compliant and offers near limitless performance and a top speed of 245MPH. 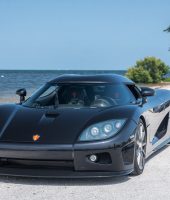