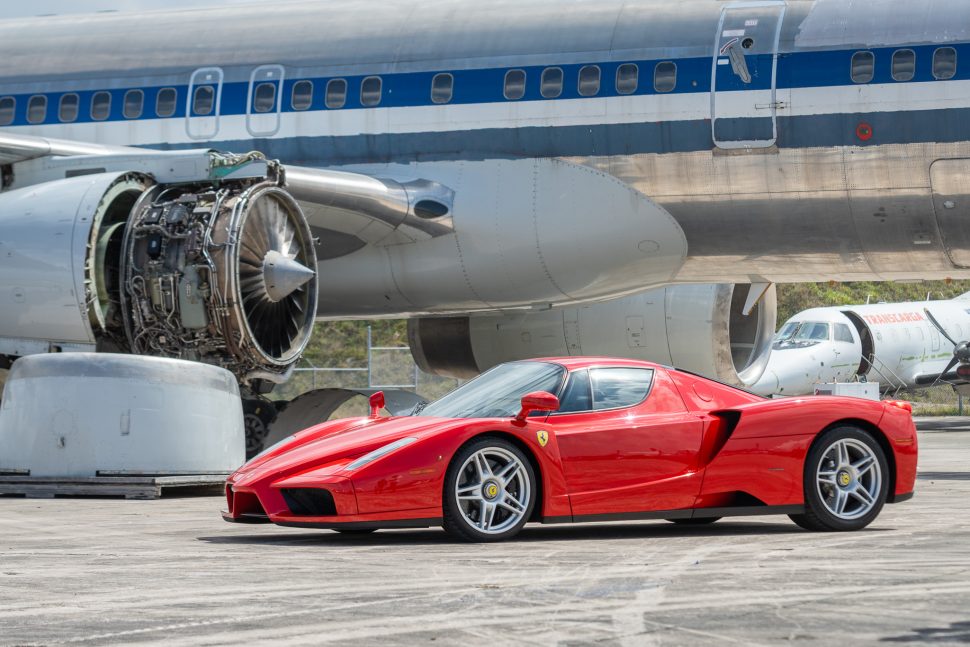 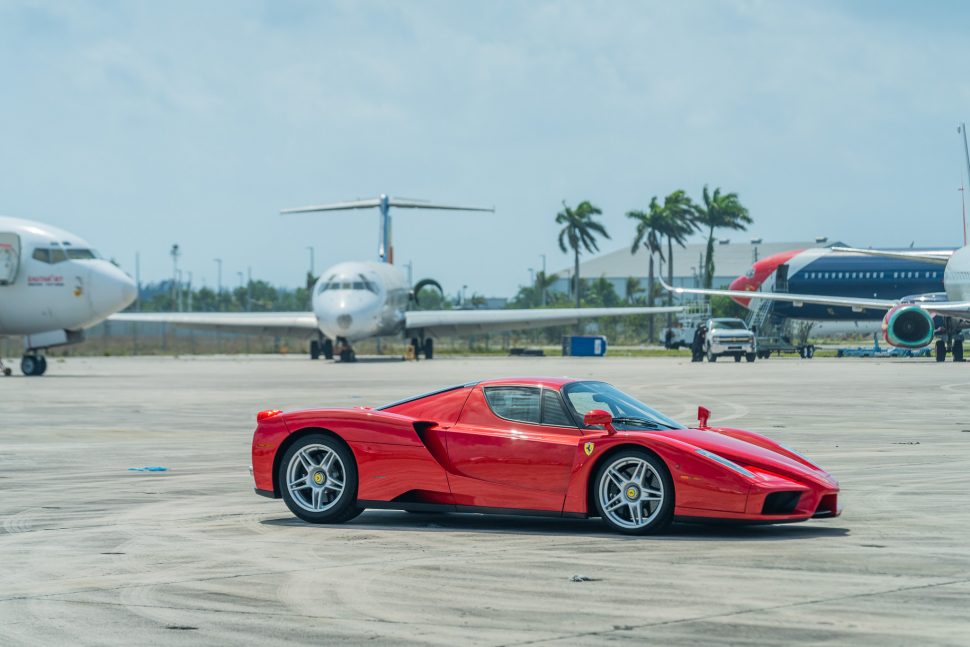 The name alone evokes passions unlike any car in history.  The Enzo was perhaps the most anticipated car Ferrari ever produced as it was launched to an eager audience and motoring media at the 2002 Paris Auto Show.  The Enzo was designed by Ken Okuyama at Pininfarina and was the fourth in the series of Ferrari supercars produced every ten years following the 288 GTO, F40, F50 and named for the late legendary company founder Enzo Ferrari.

True to Ferrari supercar form, The Enzo featured much of the contemporary Formula One technology of the time including fully carbon fiber chassis, tub and body, electromagnetic shift transmission, carbon fiber reinforced silicon carbide ceramic composite disc brakes and even a few items that were banned in F-1 at the time such as active (movable) aerodynamic aides and traction control.

The Enzo’s legend was further burnished as it made its debut at the height of Ferrari’s incredibly successful relationship with German driving legend Michael Schumacher who scored five his seven World Championships (2000, 2001, 2002, 2003 and 2004) for Il Scuderia which was riding high on the huge run they were experiencing at the time.

Ferrari set the Enzo production at 400 cars which were built from 2002 to 2004.  The cars were made available only for Ferrari’s most preferred clients around the world.  And, even if a long time Ferrari owner was lucky enough to be on the list, they had to be able to demonstrate all of the Ferraris they had owned in the past, like a virtual resume of car ownership, letters of recommendation which may be akin to the process of being accepted into Harvard as one original owner succinctly put it.

The Enzo looked unlike anything before or after.  Okuyama’s design transcended the adage of a Formula One car for the road edict.  Nose to tail, the Enzo is pure style and function encapsulated into a breakthrough design which could never be duplicated.  To this day, the Enzo is still held as the virtual gold standard in modern supercar design

More closely resembling a full bodied prototype, the Enzo’s styling starts at the nose with drop down wings jutting down from the nose a-la the Formula One car with air inlets opening to the radiators which sit either side which forms the basis for the slant-nose front boot.

The front and side intakes keep air flowing to the massive engine in the rear, while wind-tunnel-tested ground effects do the work of keeping the car glued to the pavement at speed.  Notice that there isn’t a big flashy wing on the rear of the car but even without the aide of a big wing, the Enzo handles as if it’s on rails.

As the car was sculpted from yard and yards of carbon fiber, the material was left unmasked throughout the cabin.  The carbon-fiber seats could be ordered in a variety of sizes and positions to fit the driver, with F1-style switches and controls on the dashboard.  The sparse cabin approach is typical of the Ferrari supercars as stripping away as much weight as possible was Ferrari’s goal in creating a road-going supercar with the same human-machine interface that had been developed for the track.

Ferrari’s new F140 B V12 engine was a first-generation motor which was originally based on the V8 engine in the Maserati Quattroporte, utilizing the same basic design and 104mm (4.1”) bore spacing.  The engine design replaced the former architectures seen in Ferrari V12 and V8 engines in other contemporary models.  The F430 was the second Ferrari to receive the V8 version of this new powerplant.

The Enzo has a semi-automatic transmission (also known as the F1 gearbox) using paddles to control an automated shifting and clutch mechanism, with LED lights on the steering wheel telling the driver when to change gears.  The gearbox has a shift time of just 150 milliseconds.  The transmission was a first generation “clutchless” first seen in road going Ferraris in the late 1990s.

The Enzo has four-wheel independent suspension with push-rod actuated shock absorbers which can be adjusted from the cabin, complemented with anti-roll bars at the front and rear.

The Ferrari Enzo used carbon ceramic brake discs, a first for a Ferrari road car
The Enzo uses 19” wheels and has 15” Brembo disc brakes.  The wheels are held by a single lug nut and fitted with Ferrari Formula One tire partner Bridgestone Potenza Scuderia RE050A tires.

Even though The Enzo is based on racing technology, Ferrari’s most famous supercar never officially raced in sanctioned championship.  The FXX derivative took part in Corse Clienti events but these events are not sanctioned races so no real record of Enzo’s taking part in points paying championship races but with the amount of direct Ferrari Formula One technology on the car, the racing pedigree is certainly there.

This Enzo, #28809, comes in traditional Rosso Corso over black interior and is a one owner example.  The Enzo is fully serviced, needs nothing and includes factory luggage, cover, books, tools, keys and has 11,000 miles. 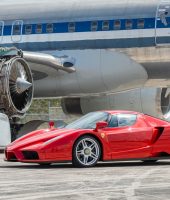 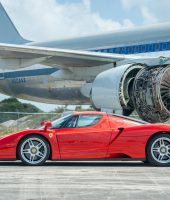 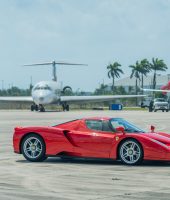 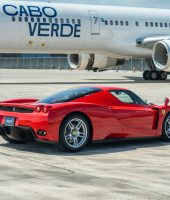 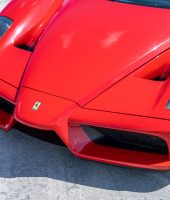 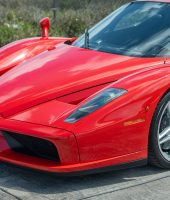 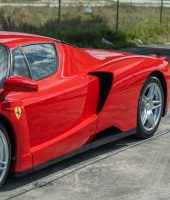 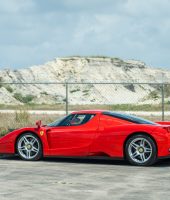 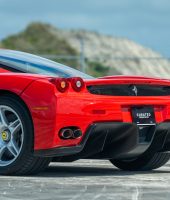 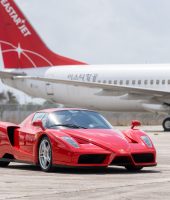