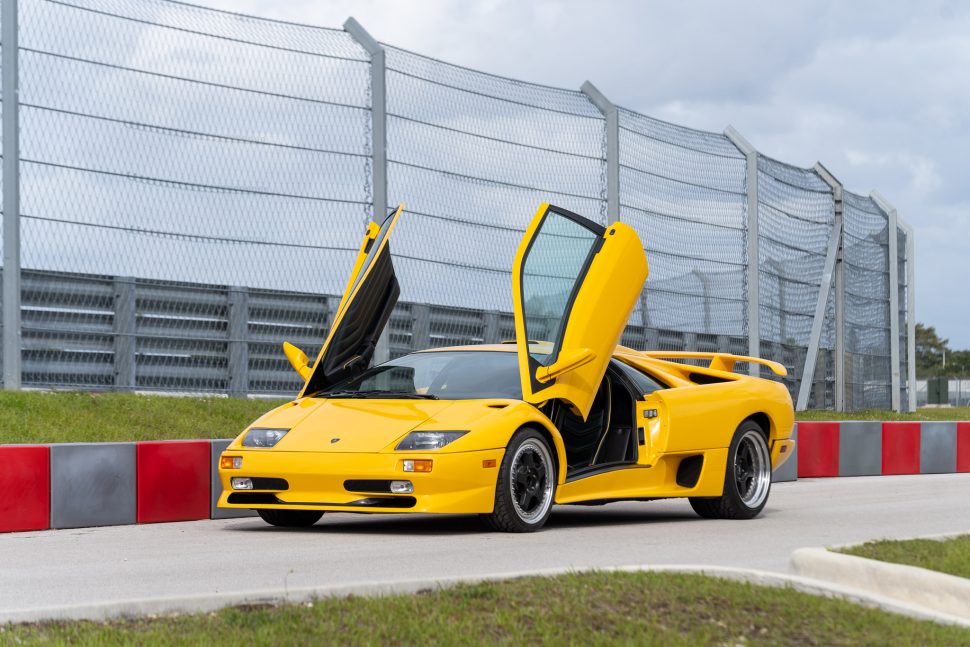 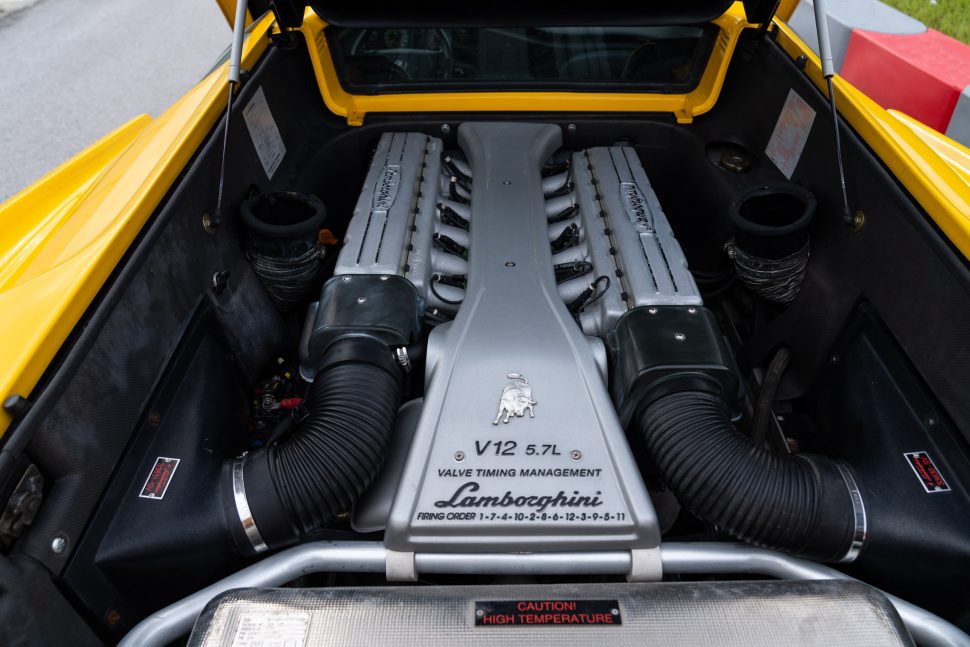 The incredible Lamborghini Diablo SV made its public debut at the 1995 Geneva Auto Show reviving the Super Veloce moniker from the Miura SV. The SV is based on the standard original Diablo in that it is rear wheel drive, lacking the all wheel drive of the 6.0 VT (Vicious Traction) example.

However, Lamborghini gave the SV an increase overall power from 485BHP on the first model to 510BHP which demands a strong hand at the wheel. To help maintain stability at high speeds, a large adjustable was added as standard equipment which could be color matched to the car or in raw carbon fiber, a few examples came with rear wing deleted.

Other minor cosmetic changes were made such as black tail lamp surrounds and repositioned rear fog and reverse lamps. Also, an extra set of front brake cooling ducts and a the famous double vent engine lid as previously seen on the SE30 JOTA models gave the SV a dramatic and racy look. The SV models came with or without the large SV graphics on either side of the cars.

The standard IVs came in six distinct colors (Giallo, Deep Black, Rosso Imola, Blu Le Mans and Verde Ithaca) each of which were chosen to compliment the black Alcantara interior which was standard on the cars.

This Diablo SV (#2225) comes in standard Giallo and includes the rear wing but minus side graphics. But, gentle readers want to know the low down on the car’s first owner, 1978 Formula One World Champion, multiple time Indy Car Champion and world famous racer, Mario Andretti.

Mario Andretti’s assistant Patty Reid confirms that he indeed took delivery of the car new in 1999, enjoyed it for two years and traded it in 2001.

Mario Andretti is one of the most successful and recognizable names in the history of automobile racing. He is one of only two drivers to have won races in Formula One, Indy Car, the World Sports Car Championship and NASCAR. While racing at the top levels of Formula One, Indy Cars and sports cars, on “off” weekends he also competed in Saturday night dirt track races in midget and sprint car events.

If it went fast, Mario Andretti drove it.

While rather soft-spoken and reserved as a person, Mario Andretti was a dominating force behind the wheel, a guy who could take a race by the scruff of the neck and make it his own on the track versus other marquis names. Mario Andretti is the epitome of the modern racing driver. Even now at the age of 81, he remains active in racing circles and still very much a great ambassador of the sport, patriarch of the Andretti Motorsport teams (owned by son Michael) and a towering figure in the pantheon of racing globally.

Originally from Montona d’Istria, Italy (now Croatia), Mario and his fraternal twin brother Aldo first witnessed racing in northern Italy and the Italian Grand Prix at Monza and it made an impression on both of them. On arrival in America in 1955, the Andretti family settled in Nazareth, Pennsylvania where the brothers first experienced Saturday night dirt track oval racing and they quickly became involved and became a regulars at northeast sprint and stock car events.

In 1969, after Aldo suffered serious injuries in a big crash in Des Moines, Iowa which left him with serous facial injuries that required reconstruction surgeries, he quit racing and left the racing chores to Mario who went on the have perhaps the most far-ranging racing career of any driver in history.

Notable for victories in Indy Cars, Formula One, sports cars and hillclimbs, Mario Andretti could drive anything and make it a winner. Perhaps, most notably, was his performance at the 1970 12 Hours of Sebring, after his own Ferrari 512 S fell out with mechanical problems while leading, Andretti was pressed into service joining the sister team car of Ignazio Giunti and Nino Vaccarella in the dying stages of the race and instructed by Mauro Forghieri to turn qualifying laps in an attempt to chase down the Porsche 908 of actor Steve McQueen and Peter Revson.

Andretti staked straight out in the Ferrari, chasing down Revson who was another American driver with F-1, CanAm and sports car pedigree, unlapping his car and then going to win overall by a mere 28 seconds (the closest finish in event history, a record that lasted 29 years).

Among Andretti’s other racing accomplishments, he won the 1978 Formula One World Championship driving the incredible Lotus 79 for Colin Chapman, the 1969 Indianapolis 500 for Andy Granatelli and the 1967 Daytona 500 for Ford.

As reported by friends, team mates and visitors lucky enough to see Andretti’s home, the garage is full more toys than imaginable including the coolest collectible exotic cars, motorcycles, boats and ultra-lights. The Lamborghini Diablo SV would be a perfect fit for Andretti who has owned several including the Diablo SV, a Countach 5000 S, Diablo Coupe, Aventador LP700-4, among others.

While having no formal ties to Lamborghini throughout his career, Andretti is fascinated by the Italian brand and usually has one or two of the latest examples in his garage. 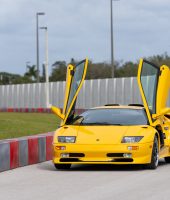 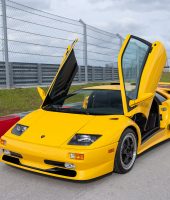 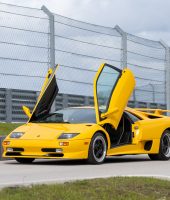 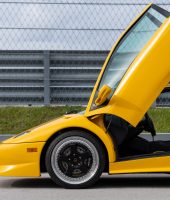 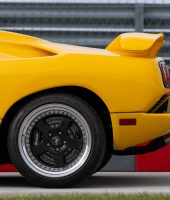 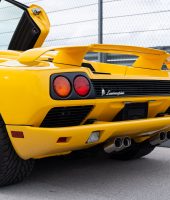 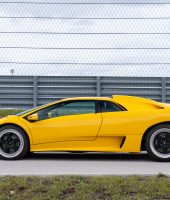 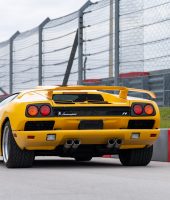 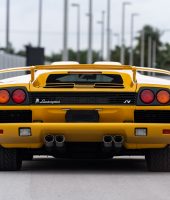 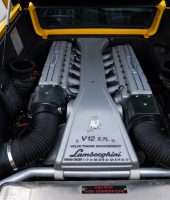 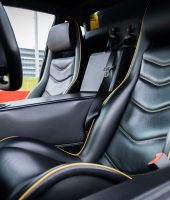 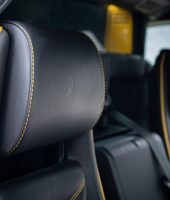