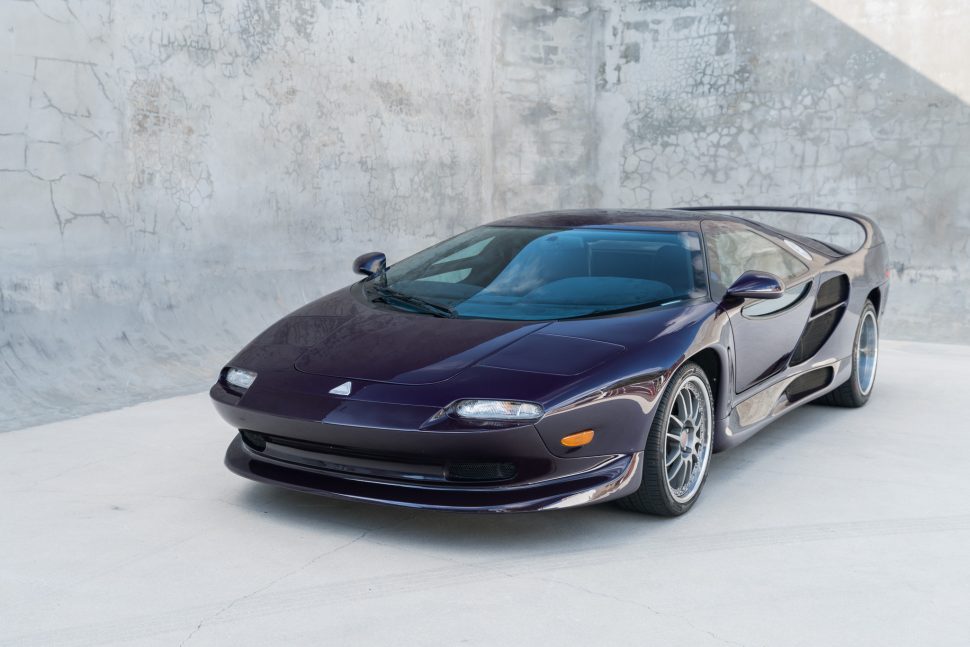 Vector Motors Corporation is an American automobile manufacturer originally based in the Los Angeles suburb of Wilmington, California.  Its history can be traced to Vehicle Design Force, which was founded in 1978 by Gerard Wiegert and vehicle production by Vector Aeromotive began in 1989 and ceased in 1993.

The company was later revived as Vector Motors Corporation and has continued to develop supercars.  When founded, Vector represented the first attempt of an American company to compete with established European performance car manufacturers like Ferrari, Lamborghini and Lotus at their own game.  Altogether, around 50 Vector supercar models were developed and produced during the 1980s and 1990s including some racing versions mostly built using American made components.

Nearly every car produced by the company is designated the letter “W” (for Wiegert) and a number.  A letter “X” after the W (such as WX-8) signifies a prototype unit.

As of August 2018, the company is still actively developing an entirely new vehicle, the WX-8, a vehicle positioned in the hypercar category, which it first announced and presented as a prototype model in 2007.

In 1971, Gerald Wiegert had just graduated from college began a design house called Vehicle Design Force and teamed up with Lee Brown, a well-known auto body expert in Hollywood, to create a new car called The Vector.  The Vector was planned to feature various powerplant options, including a DOHC Porsche engine.

The Vector was featured on the cover of Motor Trend magazine in April 1972, and a concept prototype was displayed at the 1976 Los Angeles Auto Show.  However, the car did not enter production.  Lee Brown left the design team in 1977 and Wiegert renamed Vehicle Design Force to “Vector Aeromotive” after the previous vehicle’s research was refocused on a new car, the Vector W2 in 1979.  Subsequent models included the W8 in 1989 and Avtech WX-3 Coupe and Roadster in 1993.

The new Vector Aeromotive Corporation created the Vector M12 which was loosely based on the WX-3 but powered by a version of the Lamborghini Diablo V12 engine. Consequently, some work on the M12 was handled by Lamborghini.  As such, many of the essentially American “spirit” characteristics of previous editions did not carry over to the M12.

Production of the M12 began in 1995 in Florida, and the car was introduced at the 1996 North American International Auto Show in Detroit where Vector displayed two examples.

Production was shuttered late in 1996 when the $189,000 cars did not meet projected sales targets.  Production later resumed after MegaTech sold off Lamborghini to fellow Volkswagen Group brand Audi and Vector to management.  By early 1999, only fourteen M12s were produced.  Lamborghini did not fulfill its contracted delivery of motors due primarily to Vector’s inability to pay for them.  It was alleged that Tommy Suharto, son of Indonesian strongman General Suharto and a MegaTech principal, illegally embezzled from the company for his own personal gain.

According to one story, Lamborghini took a W8 for payment for the engines, but since the W8 in question was still Wiegert’s property at the time, he took the case to court.  He won it back, although Lamborghini has since refused to give the car back.

After the remains of Vector Aeromotive were sold to American Aeromotive, Wiegert took back the assets of Vector and changed the company name from Avtech Motors to Vector Supercars, then finally to Vector Motors.

The Vector M12 was produced by Vector Automotive under parent company Megatech, and the first car made after the hostile takeover of the company from Wiegart by Indonesian concern, Megatech.  The model was produced from 1995 to 1999, when production was halted, due mainly to slow sales of the cars and mismanagement of the company.

The car was based on the Lamborghini Diablo utilizing most of its mechanical components and its V12 engine as Megatech owned Lamborghini at that time and took such steps to produce the car in higher volumes at a low cost.

The engine was centrally mounted in front of the gearbox rather than behind it as in the Lamborghini.  The styling was a loose copy of the Vector AWX-3, which was a still born project due to the Megatech takeover and later infringed by former company owner Wiegert after he initiated lawsuits and patented the designs to avoid them being reused.

The new owners, Megatech, hired designer Peter Stevens to create a more civilized and modern recreation of the AWX-3.  The drivetrain was a 5.7 liter Lamborghini V12 engine which produced 492BHP at 5,200RPM and 425 lb⋅ft (576 m) of torque at 4,900RPM.

This differed from the twin-turbocharged Rodeck V8 engine in the W8 and the AWX-3, as they were considered to be too costly for series production of the new model.  The W8 and AWX-3’s engines were transversely mounted, unlike the M12’s V12 which had a mid-mounted position.  The engineering changes placed the cockpit slightly forward than in the AWX-3, with a shorter nose and longer tail.  The M12 was able to accelerate from 0 to 60MPH in 4.8 seconds and a top speed of 189MPH.

Megatech intended the M12 to be a more road-friendly version of the AWX-3, which could get up to 13 miles per gallon of fuel efficiency and seventeen cars were produced in total, which included three or four pre-production models and fourteen production models.  One of the M12 pre-production cars was converted to racing specification by the factory, but did not perform successfully due to mechanical problems.  This car would again be converted, this time into the SRV8 that was intended to be the successor to the M12.

We often say that we like cars with extremely low production, low mileage and often weird cars, the Vector M12 certainly checks all the boxes.  An interesting car on its introduction which garnered the attention of some of the top motoring publications of the time, the Vector received both glowing and rather scathing reviews such as the inauspicious award from Autoweek Magazine as being the worst car ever tested in the history of Autoweek.   So, there’s that.

However, there is the Lamborghini influence and the Diablo V12 engine nestled in the back.  And, while the M12 did race (rather unsuccessfully) in a handful of sports car races such as the 1998 12 Hours of Sebring where the car ran for perhaps an hour out of the entire race week, it was seen as more of a novelty than a serious contender.

This Vector M12 (#48005) is the fifth built and is the only one painted in distinctive purple.  Showing just 6,388 miles, the M12 has been sparingly driven and is ready to be enjoyed again.  With the relative ease of maintaining its series-production engine, the M12 represents a unique opportunity to acquire a highly drivable and intriguing slice of supercar history.