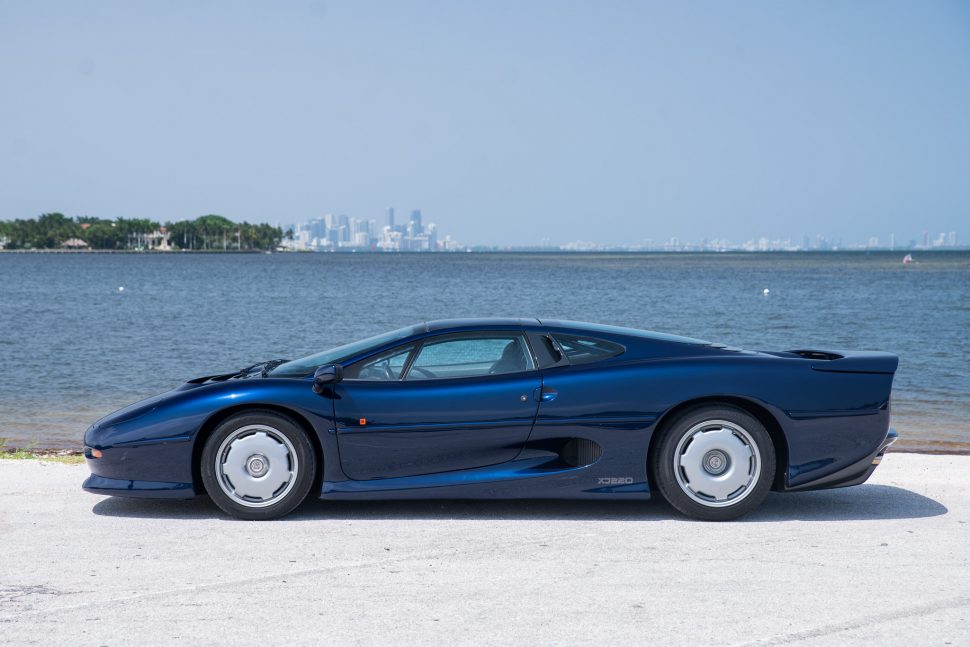 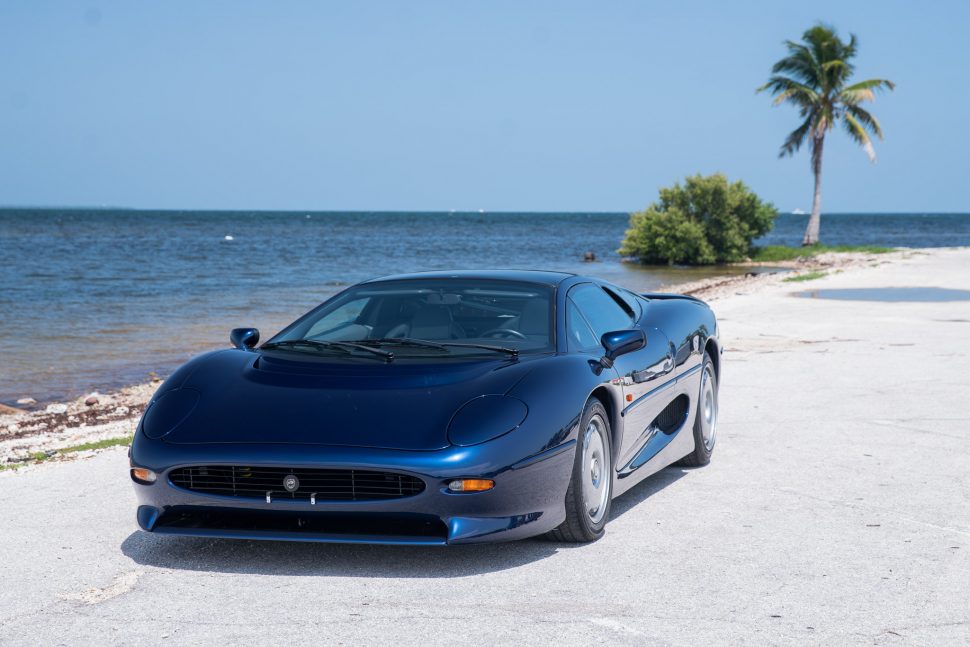 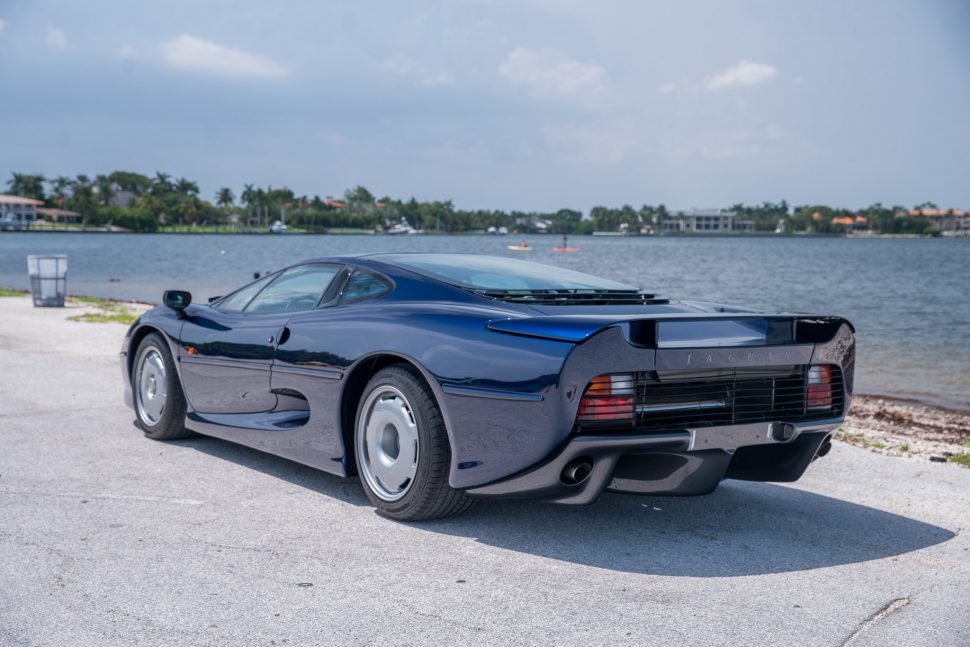 Jaguar’s entry into the modern Supercar realm began in 1992 with the stunning XJ220, a masterpiece of period engineering and a virtual racing car for the street featuring technology directly derived from Tom Walkinshaw Racing’s famous exploits racing the fabulous and successful prototypes of his construction in Europe and the United States.

Walkinshaw’s relationship with Jaguar developed years earlier as he was a regular driver and entrant with Jaguar XJSs and Rover 3500 Vitesses in the European and British Touring Car Championships in the early 1980s.  The long-time relationship culminated with top tier prototype sports car racing series, notably the European-based Group C championship when the TWR built XJR6 made its debut in 1985.

The snarling normally aspirated Jaguar V12 engines were an instant sensation with fans and media alike versus the quiet gurgling turbo entries from chief rival Porsche whose virtual stranglehold on sports car racing dated to the early 1970s and the British/German rivalry was very much on in hammer-&-tongs battles waged on the world’s greatest road race tracks.

As the Group C and more overly the IMSA GTP championships developed, competition from Japan in the form of Nissan and Toyota was developing light weight and highly powerful V6 and four-cylinder turbo motors.  The TWR Jaguar Group C and GTP teams found themselves on the back foot with their heavy V12s and if TWR wanted to challenge for overall wins, races and championships, they had to follow Nissan and Toyota’s lead and develop a V6 turbo of their own.

The turbo-engined Jaguar XJR11 was put into service in Group C in 1989 and the XJR10 was designated to IMSA GTP competition in sprint events for 1990 while the tried and true V12 cars remained in service for the long-distance races at Daytona, Sebring and Le Mans.

The Jaguar Sport V6 turbo engines were derived from Rover’s turbo charged V64V and weighed just 315lbs, far less than the 6.0 liter V12s.  The spending war was on and the lighter lump allowed the Ross Brawn and Tony Southgate designed chassis to compete against the Japanese entrants which were starting to dominate, especially in the IMSA GTP series where Nissan won four consecutive championships between 1988 and 1991.

The modern Jaguar V6 with twin overhead camshafts, four valves per cylinder with Garrett turbo charges bolted on, the 3.0 liter engine had an output of 650BHP with fixed boost per IMSA rules and the larger Group C motor producing upwards of 750BHP depending on boost which drivers could still control from the cockpit.

In 1992 and with all of the real world racing experience and success imaginable, Jaguar commissioned TWR to produce the fabulous XJ220 which features the same 3.5 liter that was utilized in the XJR11.  Handmade and limited to only 275 units, the XJ220 quickly gained notice as the fastest production car on the road with a top speed of 212.30MPH and setting a then record lap time of 7:46:36 at the Nurburgring in 1991, the XJ220 held the mantle of fastest production car in the world from 1992 to 1993 only to be supplanted when the McLaren F1 made its debut.

This Jaguar XJ220, VIN SAJ-JEAEX8AX/220631 and number 228 in the build sequence is a completely original example and is currently in our showroom in Miami showing 6,199KMs (3,852 miles) on the odometer and certified legal in all fifty states.

The XJ220 was originally delivered in the U.K, was part of a major California collector’s cars and has Swiss provenance.

The interior is immaculate and the car has the original Alpine radio, untouched and unmolested.  No pulling leather, scratches or scuffs.  Mechanically, the car is very sound.  The Le Mans blue paint is very nice, stunning and in original condition. 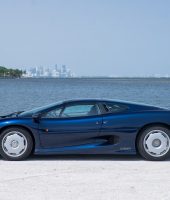 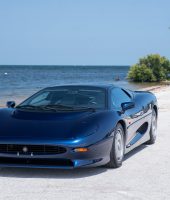 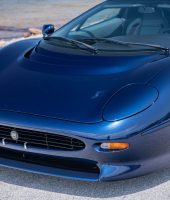 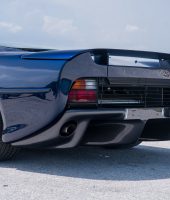 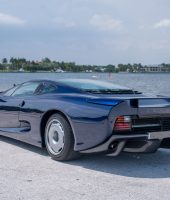 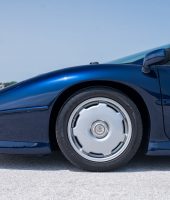 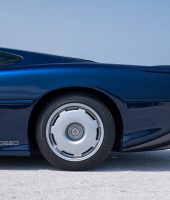 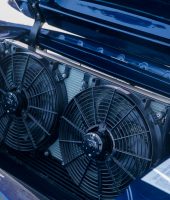 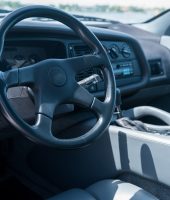 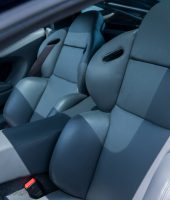 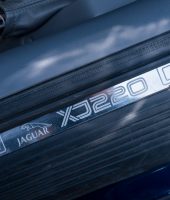