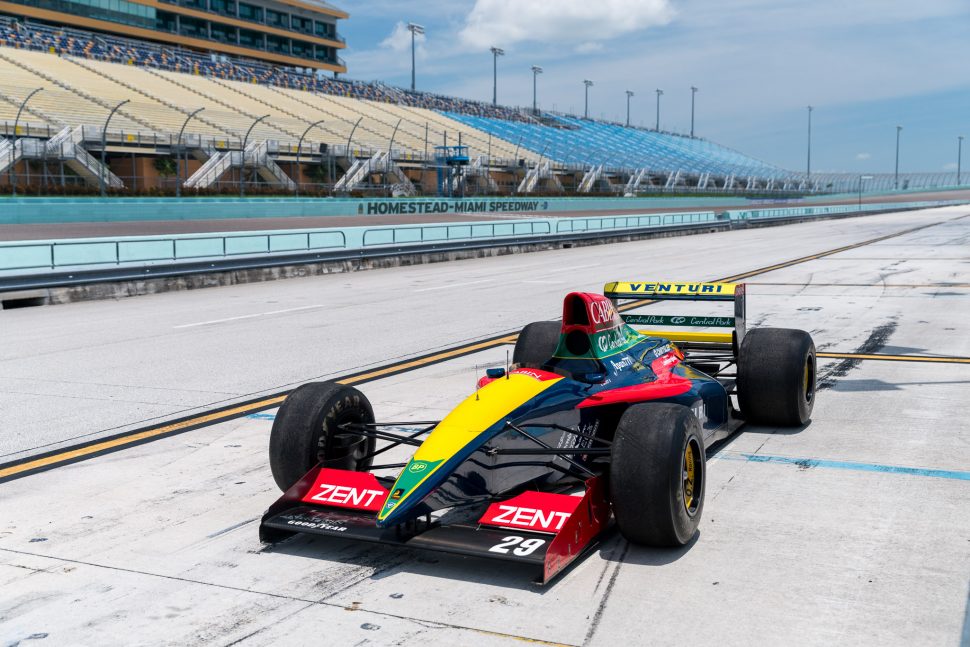 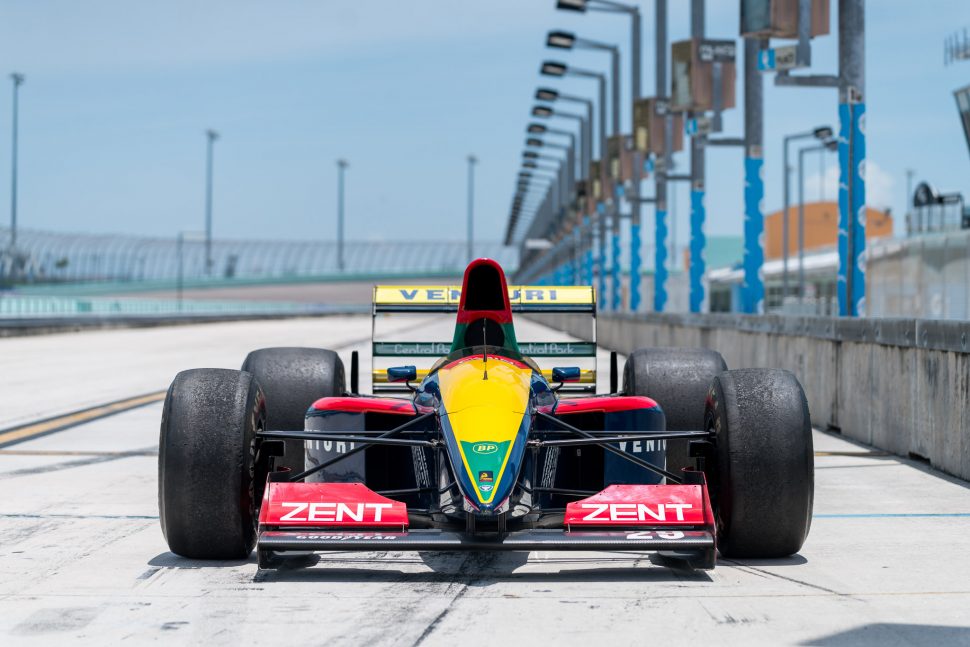 Lamborghini’s initial foray onto the world stage of Formula One World Championship racing came at the end of the turbocharged era in 1988 when the FIA opted for a new rules package which ushered in the 3.5 liter normally aspirated formula for 1989.  Lamborghini, then under Chrysler ownership, hired former Ferrari designer and engineer Mauro Forghieri who was put in charge of the design and building of the new Lamborghini engine, the 3512, which was put into service with the Larrousse team at the season opening Brazilian Grand Prix at Rio de Janeiro in 1989.

Not surprisingly, the 600BHP Lamborghini V12s were easily the best sounding engines, especially in top gear on long straights, of the Formula One grid.  However, they were also easily the heaviest lumps especially compared to the lighter and more compact Ford Cosworth V8 and Renault V10 engines.  The extra weight of the Lamborghini engines combined with an incredibly poor record of reliability put paid to the team’s results in the championship which is why the engines never appeared in the chassis of any of the top teams of the time.

In the heart of what is now known as Formula One’s 3.5 liter normally aspirated era (1989-1994), the Championship was flush with major manufacturer participation in the form of V8, V10 and V12 engines from nine engine makes including Renault, Honda, Ferrari, Ford Cosworth, Illmor, Judd, Mugen, Yamaha and Lamborghini for a total of sixteen teams;  perhaps the most diverse and competitive field in F-1 history.

Many point to this era of the screaming, ultra-high revving (up to 20,000 RPMs before being reigned in by regulations) normally aspirated engines of such variety to be one of, if not the, most significant and coolest in Formula One history.  For the 1992 season, one team stood virtually alone atop the results and in the Championship, Williams-Renault.

Williams-Renault, led by Sir Frank Williams and Patrick Head at the height of their careers and their driving tandem of Nigel Mansell and Riccardo Patrese, was so dominant that Mansell won the first five races of the season.  Mansell quickly became the darling of the British media while being the first driver in Formula One history to win nine races in a season and had clenched the World Championship by August at the Hungarian Grand Prix with five races remaining on the schedule.

And, while other contenders McLaren-Honda, Ferrari SpA and Benetton-Ford offered token resistance, Mansell’s domination was so complete that all of the air was let out of the Championship during final quarter of the season while Williams team mate Patrese was left to fight it out with Ayrton Senna and Michael Schumacher for the runner up position.  Italian veteran Patrese eventually bested Schumacher in the Benetton-Ford by only three points and was six points clear of Senna in the McLaren-Honda with the Williams-Renault team locking out first and second in Driver as well as the Manufacturer World Championships.

Further down the order, the renamed Venturi-Larrousse LC92 Lamborghini team of Bertrand Gachot and Ukyo Katayama were having a season which could only be described as the polar opposite of the Williams-Renault team.

For the 1992 season, the Larrousse Lamborghini team had parted ways with Lola as their chassis supplier over a payment controversy and the team was rebranded as Venturi-Larrousse.  Venturi had been best known as a sports car chassis builder based in Monaco but none the less bought a 65% share of the Formula One team.  In turn, Venturi then hired Robin Herd away from the Fondmetal team to build up a chassis around the Lamborghini 3512 V12 engine which the team had been using since 1989.

Unfortunately, Lamborghini’s 3512 engine malfortunes continued, handicapped by weight, Lamborghini’s lack of development of the V12 and the various reliability issues which plagued the program from its inception.  Despite this, the motor was pressed into service by other teams such as Lotus, Ligier and Minardi with pretty much the same effect.  As former Lotus driver Derek Warwick recalled of the Lamborghini engine (as), “All noise and no go” in a 2014 interview, the results never quite lived up to the potential.

The best result the Lamborghini 3512-engined Larrousse achieved was third at the 1990 Japanese Grand Prix at Suzuka Circuit with Aguri Suzuki driving.  That lone podium result gave the manufacturer hope but was also the result of Senna intentionally taking himself and Alain Prost out at the start of the race and rather high attrition throughout, giving the Japanese driver a popular result in his home Grand Prix.

For 1992, the familiar and colorful Venturi-Larrousse team livery bodywork of blue, red yellow and green remained along with the Lamborghini 3512 V12 engine.  The multi-color livery was a popular trend started by Benetton in the mid-80s guaranteeing that even if results were lacking, the cars looked good for TV and still cameras.

Drivers Katayama and Gachot were named as the team’s full time tandem, the Japanese/Franco (even though Gachot is Belgian, carried a French passport but referred to himself as European and even had the new European Union flag prominently displayed on his helmet and driving suit) driver lineup represented a fresh path for the team and their aspirations to advance to the top tier of Formula One and a virtually new sheet of paper all round.

However, the results still were not there and at a time when Formula One only scored points to sixth place, Gachot scored the team’s single point of the 1992 season by finishing sixth at Monaco with Chassis #LC92-01.  At best, the team was a mid-pack runner and so the heavy lump would be equalized on a slower circuit like Monaco or anywhere a disadvantaged team may have been lucky enough to have the greatest equalizer, rain, thrown into the equation.

The majority of the season for Venturi-Larrousse Lamborghini was a long string of mechanical retirements, spinouts, shunts, disqualifications, DNFs and DNQs among a handful of some finishes from twelfth to fifteenth with Gachot’s single point result classifying him in nineteenth place in the Driver’s Championship and the team finished thirteenth in the Manufacturer’s Championship.

In leu of payment to Bertrand Gachot for his services, Venturi-Larrousse gifted him with the car which he owned for many years until it was recently sold to racer Jean-Pierre Lecou.

Bertrand Gachot’s story did not end there however.  A promising young driver when he debuted in Formula One with the Onyx Team, Gachot drove for no less than seven teams (Onyx, Rial, Coloni, Jordan, Lola, Larrousse and Pacific) total during his six year F-1 career where he made 84 entries and 47 starts among one start in CART for Dick Simon and various other appearances in sports car races throughout Europe and Asia.

Gachot made headlines for all the wrong reasons however in 1991 when his career was interrupted by a court case in the U.K. for having allegedly sprayed mace into the face of a taxi driver, a serious offense at the time.  His race seat at Jordan Grand Prix Racing was filled by a young, up and coming guy named Michael Schumacher at the Belgian Grand Prix while Gachot sat in a British jail as cries of “Free Gachot” were made by supporters.

During the legal squabble which ensued, Gachot missed a total of four Grands Prix over a two-month period and returned to the Jordan team at the Japanese Grand Prix to take his seat back from new recruit Alessandro Zanardi but the team refused.  It was at this time when Gachot moved on to Venturi-Larrousse and put his troubled past behind him and saw out his F-1 career with the Pacific team in 1995.

Today, Bertrand Gachot is the CEO of HYPE energy drink, seen as a semi-regular sponsor of Formula One teams most notably Force India and Le Mans winning driver Andre Lotterer.  Under Gachot, HYPE has been introduced as a new brand into different markets, the U.S. in particular, and tie-ins with the music industry.  Gachot also owns F1i.com a Formula One news site where the HYPE brand is heavily advertised.

While the Venturi-Larrousse Lamborghini LC92-01 isn’t bound to glory such as competitors Williams-Renault, Benetton-Ford, McLaren-Honda and Ferrari SpA, it still represents one of the most exciting and memorable eras of Formula One history and would be a center piece to any Lamborghini collection. 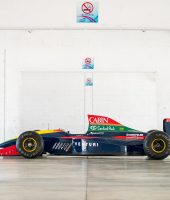 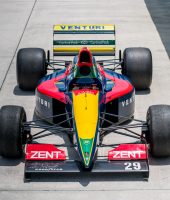 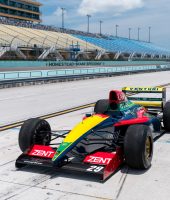 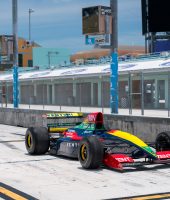 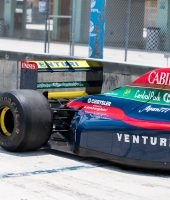 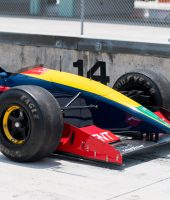 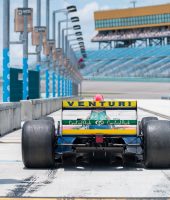 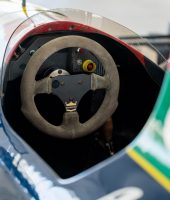