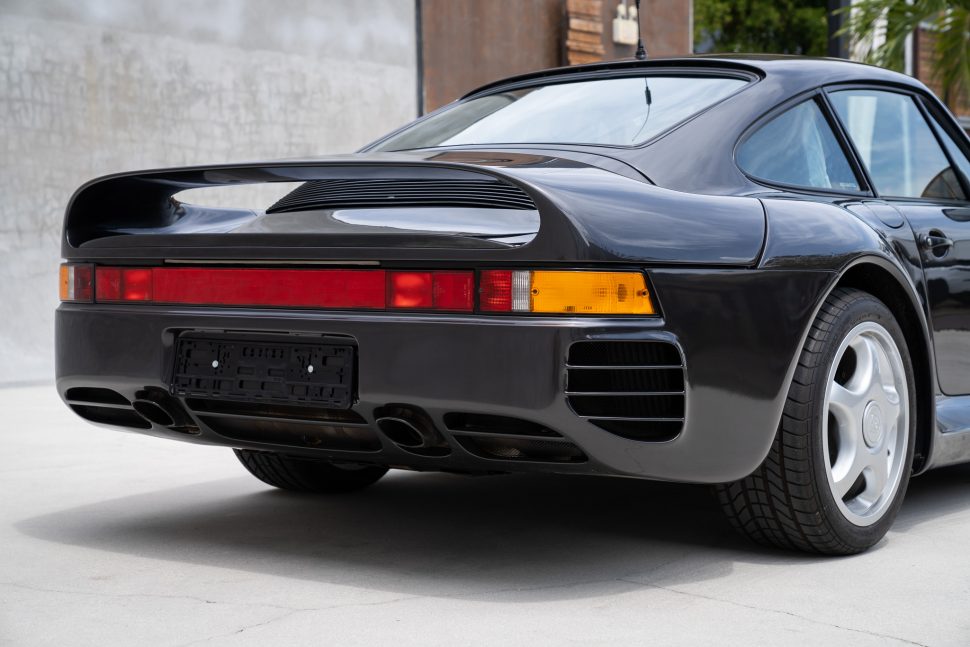 The first Porsche Supercar, the ultimate road-going development of the racing inspired 911 and star symbol of 80’s excess.

Spent many years as part of one of the best Supercar collections in Asia. Serviced by Porsche Classic in 2010. Original paint and interior.

Designed and built to compete against Ferrari’s 288 GTO in Group B racing, Porsche introduced the 959, their most sophisticated and elaborately designed road going car to date based on the long-serving 911 in 1986. True to form for Porsche, many of the features found on their racing sport prototypes found their way into the 959 which put Porsche firmly in the business of building Supercars.

The 959 technology platform was built on the basis of the 911 model line in an exclusive limited series of 345 cars. With the race proven bi-turbo flat six engine featuring water- cooled, 4-valves per cylinder heads, electronically controlled chassis and all-wheel drive system, as well as an aerodynamically optimized body, Porsche pushed the limits of the standard 911 and created one of the most significant cars in history.

In 1982, the FIA created Group B as an undercard category to the new Group C prototype class and a viable production-based GT category to replace Group 5, ushering in what many racing historians point to as the most important era in sports car racing history.

Porsche and Ferrari had begun production of the 959 and 288 GTO respectively in order to meet the FIA’s Group B homologation requirements that 200 road-going cars be produced. And, while many manufactures committed to Group C (including Porsche) by the same token, Group B failed to gain traction with other manufacturers. However, manufactures such as Audi, Peugeot and Ford saw that Group B regulations would apply to their interpretation of the rules for the World Rally Championship (WRC).

Despite the demise of Group B sports cars, Porsche produced a racing version of the 959, the 961, to race in a few one-off events such Le Mans (Group C) and in the U.S. IMSA (GTP) series. This was initially successful, the highlight coming in 1986 with a seventh place overall, first in the specially created GTX class finish in it’s first appearance at the 24 Hours of Le Mans with French racing heroes René Metge and Claude Ballot-Lena driving the works entered example.

Later in 1986, in its one and only appearance in the U.S. at the IMSA Daytona 3-Hour Finale event, the 961 finished 24th overall with drivers Günther Steckkönig and Kees Nierop. Matched against Porsche 962s, Jaguar XJR-5s and March-Chevrolets in the GTP category, the 961’s Dunlop tires struggled on Daytona’s 33o banking and experienced several blowouts which limited the car’s competitiveness.

The 961 returned to Le Mans in 1987 but caught fire and nearly burned to the ground after a shunt on the Sunday morning with Nierop driving. The amiable Dutch-Canadian driver who had an overall win at the 1983 12 Hours of Sebring to his credit, had to abandon the car on circuit where it was nearly completely destroyed before track marshals could reach the scene and extinguish the blaze; it was just such a pity.

After the Le Mans inferno, Porsche scrapped the 961 project as the Group B category failed to materialize and sanctioning bodies had difficulty deciding if it was a GT or full out prototype. Porsche Motorsport brought the remains back to Stuttgart, rebuilt the car and it appears today in the Porsche museum in original Rothmans livery.

Stepping completely out of their element, Porsche entered a highly modified and off- road 959 example in the 1986 Paris-Dakar “Desert Raid” event. Paris-Dakar was emerging as a huge international motorsport event and caught the attention of Porsche (among other makes) which wanted to showcase the all-wheel drive 959 in the wide- ranging conditions from work-a-day roads to desert sands to deep jungle. No other event in the world could come close to throwing so many different driving conditions at competitors as the original Paris-Dakar.

Porsche’s 959 Paris-Dakar venture ended with a one-two victory for René Metge/ Dominique Lemoyne and Jacky Ickx/Claude Brasseur. In fact a third 959 which was only really intended as a support vehicle, finished the event in sixth place. A hugely historic if not improbable result for Porsche which, to that point, had not been known for off-road racing.

On its introduction at the 1985 IAA Frankfurt, the Porsche 959 was designated as the world’s fastest road-going production car. With a top speed of 197MPH the 959 supplanted the Ruf-Porsche BTR as fastest production car with some concurrent variants such as the 959 S achieving as much as 211MPH.

Porsche pulled out all of the aero and technological tricks to achieve the 959’s top speeds and was considered as the most technically advanced road-going car ever built. The 959 featured items which are common place today but things like race proven electronically controlled fuel injection, automatic electronic/hydraulic ride height adjustment with a mixture of steel unibody, aluminum doors and front bonnet done in kevlar and fiberglass, things which to this point were only seen in action on the world’s top race circuits.

Adding to this, the car’s all-wheel drive system set the standard for all future Porsche turbo-charged cars starting with the 993. Likewise, the twin-turbo chargers were, again, race proven by Porsche dating to the early 70’s when their turbo-charged flat six engines dominated the world’s most important sports car races with production based 934s, 935s as well as 936, 956 and 962 prototypes.

And, while market segment competitors like Ferrari and Jaguar were relatively new to turbo and electronic control technology, Porsche had amassed huge amounts of experience and success making the technologies not only fast but reliable enough to routinely win 12 and 24-hour races on the world stage.

The list of technical features on the 959 is truly amazing especially considering the cars were made in the mid to late 80s.

• Not unheard of for cars of the period, 959s are fitted with anti-lock brakes. Porsche claimed at the time braking distances were “shorter than would be possible for a normal automobile”.

• Ride height and damping may be varied electronically with three ground clearance settings. The 959 may also lower itself automatically at high speed.

• 959 wheels are made from magnesium with hollow spokes, center locks and feature electronic tire pressure monitoring, the first available for a road-going car. The wheels may only be mated to Bridgestone RE71 Denloc tires which were one of the first to utilize run-flat technology.

• Utilizing exotic body materials and a slippery aerodynamic shape, the 959 has a drag coefficient of just 0.31 where an ordinary 911 of the era was 0.38.

• The 959 uses a six speed transaxle with first gear being a “creeper”, not intended for pavement. Thus, the shift knob pattern begins “G-1-2-3-4-5″ with “G’ standing for Gelände (off road).

• To comply with FIA Group B rules, the 959’s engine is just 2.8 liters with the sequential turbocharging system increasing power to 444BHP at 6,500RPM whereas a 911 Turbo of the same period produced 282BHP at 5,500RPM. The kick from the maximum boost of 14.5PSI helped define the car’s character.

• Two identical Kühnle, Kopp & Kausch (KKK) turbos mounted near the cylinder banks each have their own intercooler. At low revs, exhaust from both banks is directed to the left turbo as the right unit is bypassed by a one-way valve

• The second turbo comes into play as revs pass 4000RPM. To that point, any unused exhaust pressure is expelled through a small muffler which is controlled electronically. Porsche claimed that each of the 959s engine management computers cost $10,000 in 1987.

Despite its price of DM 431,500 ($225,000), Porsche’s order books for 959s quickly filled and the first allotments sold out with Porsche’s most well-heeled clients lining up for their chance to own the first outright Supercar from Stuttgart.

After its production debut at the 1985 Frankfurt IAA, the first 959s began rolling off the assembly line in Karosserie Bar (not the Porsche factory in Zuffenhausen) in 1986.
With what started out as Helmuth Bott’s vision of creating a car to compete in Group B in 1981, Porsche’s top customers could experience the company’s racing technology for themselves and park the car in their own garage five years later. 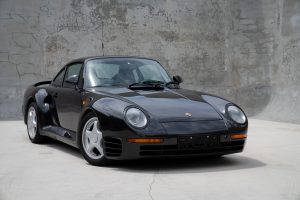 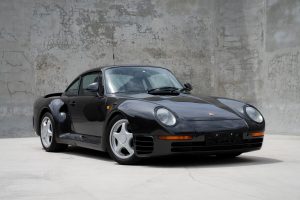 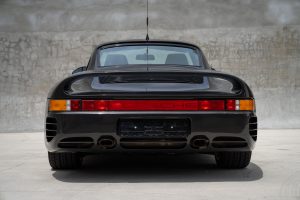 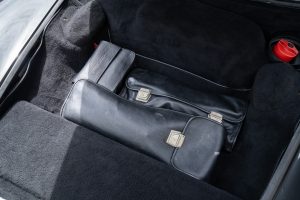 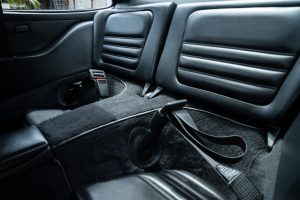 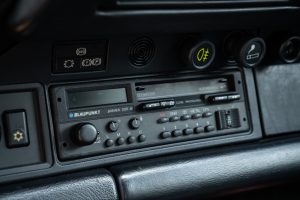 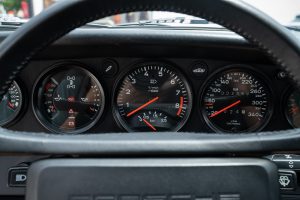 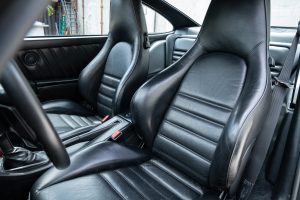 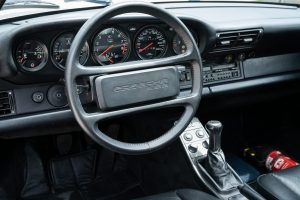 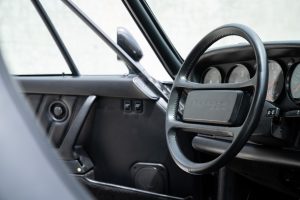 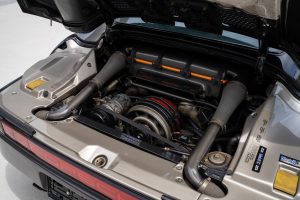 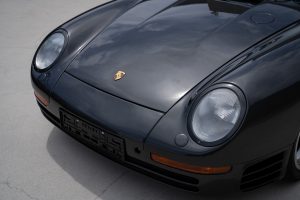 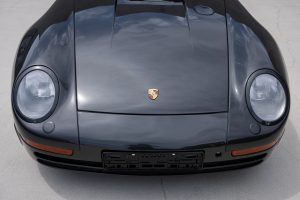 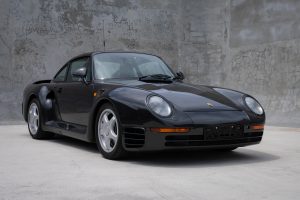 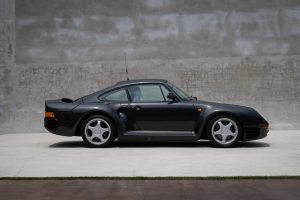