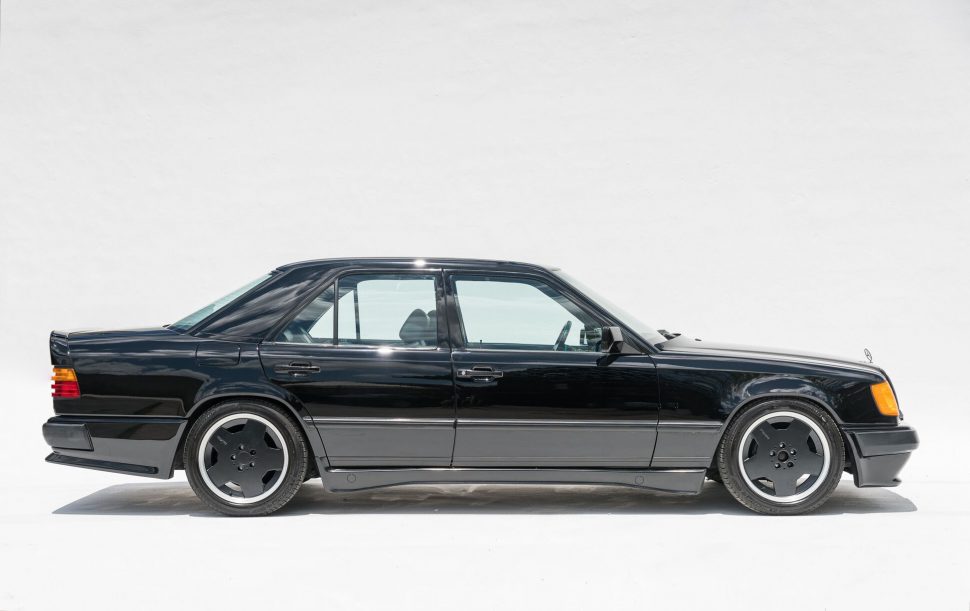 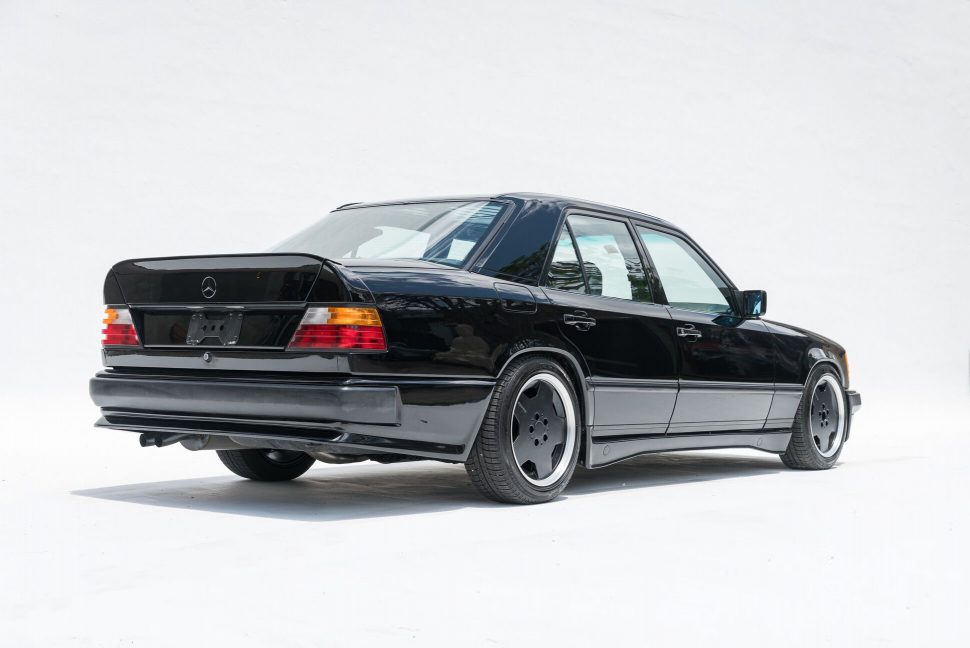 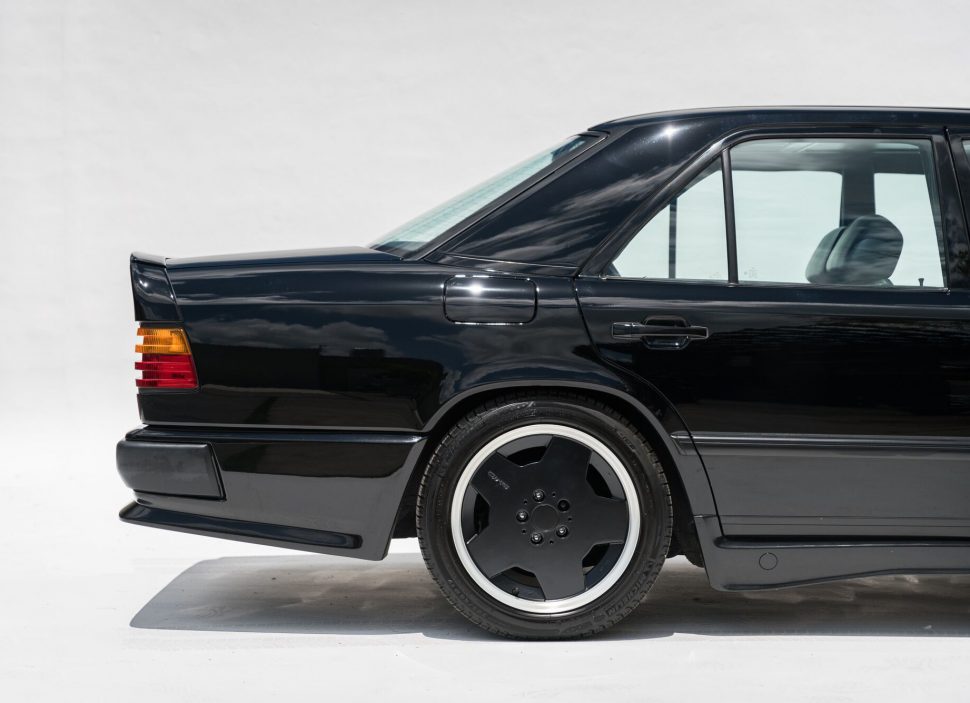 There are plenty of greats and a few you could call special, but only a handful of cars can truly be described as legendary.  The 1986 AMG Hammer falls into the latter category.  It has become a kind of cultural myth, a great car by which other great cars are measured.

And so it came to be that a small specialist company established in a small German town built a special car.  It all started with the simple idea of taking a medium-size sedan and putting a great big engine in it.

It all started with the 1986 AMG Hammer.

There were lots of German companies building specialty cars during the 1980s.  If you’ve ever seen a slope-nose Porsche 911 with a rear wing the size of a picnic table or a Mercedes-Benz with a body-color grille and gold-plated extensions on the fenders, then you’re aware of the kind of good taste that prevailed on the German autobahn at the time.

But AMG was a different kind of company.  Ex-Mercedes engineers Hans Werner Aufrecht and Erhard Melcher established it in 1976 in tiny Burgstall an der Murr near Stuttgart.  Engines were their specialty, the preparation of Mercedes engines for touring car racing in particular.  AMG made its name when its Mercedes-Benz 300 SEL 6.8, the V8-powered S-Class of its day, finished the annual 24-hour race at Spa-Francorchamps in 2nd place overall and first in class.  This car, nicknamed “the Red Sow,” has been recently re-created by AMG.

Like every other German tuning company, AMG did a fine business in cars with Recaro seats, ATS wheels and trick paint during the 1970s, but its racing-style engine modifications became more and more popular into the 1980s.  And when the first BMW M5 appeared as a concept car in 1984 with its BMW M1 engine, AMG responded to the challenge.

For a further $39,950, AMG would bore out the engine to 6.0 liters and blueprint it, then match it up with a re-valved four-speed transmission, a Torsen limited-slip in the largest available rear differential, and a stouter rear subframe to withstand the twist, not to mention a full kit of exterior and interior trim pieces.  Once you emptied your pockets of your last $14,170, you’d get the lower AMG suspension with more aggressive damping, and 17-inch wheels with 215/45VR17 front and 235/45VR17 rear Pirelli P700 tires.  Then you’d need another $18,000 to bolt it all together.

As near as we can figure, the AMG Hammer would cost you $161,422.  Most were built from the four-door version of the W124 body, although the prototype seems to have been a two-door and a wagon was built for a buyer in Chicago.  Perhaps as many as 30 cars had some form of the Hammer makeover, each custom-ordered.  Even AMG says it can’t really be sure about the total.

Back in 1986 you could have had two examples of the Ferrari Testarossa for the price of one loaded AMG Hammer.  Not that you’d be any faster at conveying four people in the two Italian cars.  At the time, Ferrari quoted a top speed of about 180MPH for the Testarossa, but we’re holding in our hands a piece of AMG letterhead stationery (complete with fax number; remember those?) that quotes a top speed for the Hammer of 190MPH.  Actually, it says “over” 190MPH.

And we’re not merely holding a piece of paper with some relevant facts on the Hammer, as we’ve also got the keys to one. Not just any Hammer either, but the Hammer — AMG’s own example.  It’s a sedan with 6.0 liters of V8 under its hood and looks as good today as it would have in 1986.  When you consider how everything else from the 1980s has aged, the Hammer still looks very fresh, for which you can thank the W124’s classic proportions from Mercedes-Benz Design Director Bruno Sacco.

The W124 is the last of the classic E-Class cars, and the amazing restraint of the AMG body kit (for the time, at least) helps preserve the car’s good looks.  Given the pastel sport coats and brick-size mobile phones of the 1980s, the 1986 AMG Hammer is remarkably demure.  Its understated lines give no clues regarding the beast within.

Power in the AMG Style

The AMG people looking after this car are understandably nervous.  It’s been rolled out to celebrate the introduction of the Mercedes-Benz C63 AMG here at Dunsfold Aerodrome in Surrey, England, now famous as the place where Top Gear does its Power Laps.  The thing is, it’s wet — biblically so.  It’s raining and the pavement is streaming with water, so this is hardly the place for a few quick runs up and down in a car with very old tires and a 6.0-liter V8 putting out what is reckoned to be 396BHP.

The interior is much like any W124.  It seems very modern, although the slot for the tape cassette in the audio system gives away the game, as in-car entertainment has moved on in the ensuing decades.  The bucket-size ashtray in the center console is also a serious throwback.  If you owned a Hammer in the 1980s, you apparently were likely to enjoy a BIG cigar.  The speedometer needle can reach for 320KMH (199MPH) on the AMG-branded central dial, which is just about the only real hint that this isn’t just an ordinary E Class.

Finally the weather breaks and we rouse the AMG V8 with a turn of the ignition key.  It rumbles into life with a lot more refinement that we expected.  In its day this engine’s numbers were sensational, some 396BHP and 417 pound-feet of torque.  Its peak power is created at 5,500RPMs, where the V8 would be working very hard, while the torque peak is also pretty far around the dial at 4,000RPM.  It’s a different sort of power compared to the brutal shove right from idle that you get from AMG’s modern, torque-rich 6.2-liter V8.

To call it slow would be ridiculous, but the 1986 AMG Hammer’s most crushing performance is more evident on the move rather than its getaway from a standstill.  In its day it was often quoted as having the legs of contemporary exotics like the Ferrari Testarossa and the Lamborghini Countach between 60 and 120MPH.  With a runway to test it, the Hammer confirms its reputation.  Once you’re rolling, the power builds irrepressibly and the V8 digs ever deeper to drive the Hammer forward.  It wouldn’t feel odd in a modern super sedan, but you have to recalibrate your senses to 1986, when this level of performance was scarcely believable, especially from a superficially innocuous four-door.

There are only four gears in its autobox, though the Hammer thunders through them relentlessly as it eats up the runway’s length.  There’s little noise, and the predominant sound at speed is that of the wind rushing by.  The suspension with its trick electronic-controlled dampers is firm, though the ride feels relatively compliant compared to modern performance sedans with their ultralow-profile tires.  The W124’s recirculating-ball steering has a weighty amount of effort, but it’s a little vague, which is what the Mercedes engineers of the era were after because they were fearful of sensitivity to crosswinds at high speed on the autobahn.  The brakes betray the Hammer’s age, as they’re grumbling after a few high-speed passes.

We’d like to spend some more time getting better acquainted, exploring the finer nuances of the AMG’s dynamics, testing the thresholds of the old tires further, but time’s not on our side and the weather is growing worse.

When the 1986 AMG Hammer first rolled out of the company’s shop, it caused a stir, but when it reached America, the car became a sensation.  European specialty cars had been missing in action for about a decade because of air emissions regulations, but the Hammer arrived just as the drought ended.  When Hans Werner Aufrecht initiated a distribution deal with Andy Cohen of Beverly Hills Motoring Accessories, he had no idea that his car would soon appear on the cover of every car magazine in America.

Mercedes-Benz thought the AMG Hammer was such a good idea that it released the Mercedes 500E in 1992.  Like the Hammer, it combined the W124 sedan with a V8, though it was the 322-hp 32-valve DOHC 5.0-liter V8 from the Mercedes-Benz 500 SL. Porsche actually prepared the engine and did the installation, and it took 18 days for each car to be transported from the Mercedes-Benz assembly plant to an old Porsche facility in Zuffenhausen and then taken back to Mercedes-Benz for final assembly.  Some 10,359 examples of the 500E (the first car to be called a “four-door Porsche”) were built over the course of the model’s three years.

Despite the small sales numbers of the AMG Hammer, the company made out.  In 1990 AMG and Mercedes concluded a deal to distribute AMG cars through Mercedes-Benz dealers.  More important, AMG was commissioned to develop specialty cars for Mercedes-Benz itself, first the E60 AMG, a derivative of the Mercedes-Benz 500E (only a handful were made), and then the 1993 Mercedes-Benz C36.  Ultimately AMG became the wholly owned subsidiary of Mercedes-Benz that it is now.

Today every German car manufacturer offers some kind of super sedan, and we’ve come to take the idea of a 200MPH four-door for granted.  But even after all this time, they’re all chasing the 1986 AMG Hammer, the car that started it all. 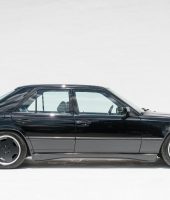 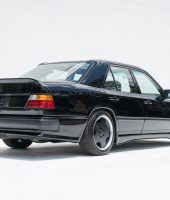 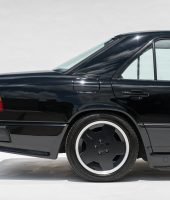 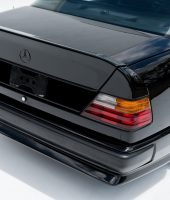 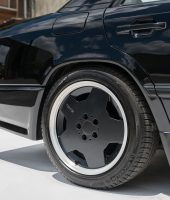 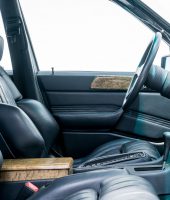 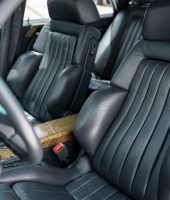 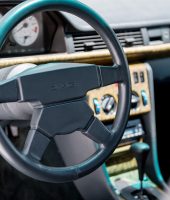