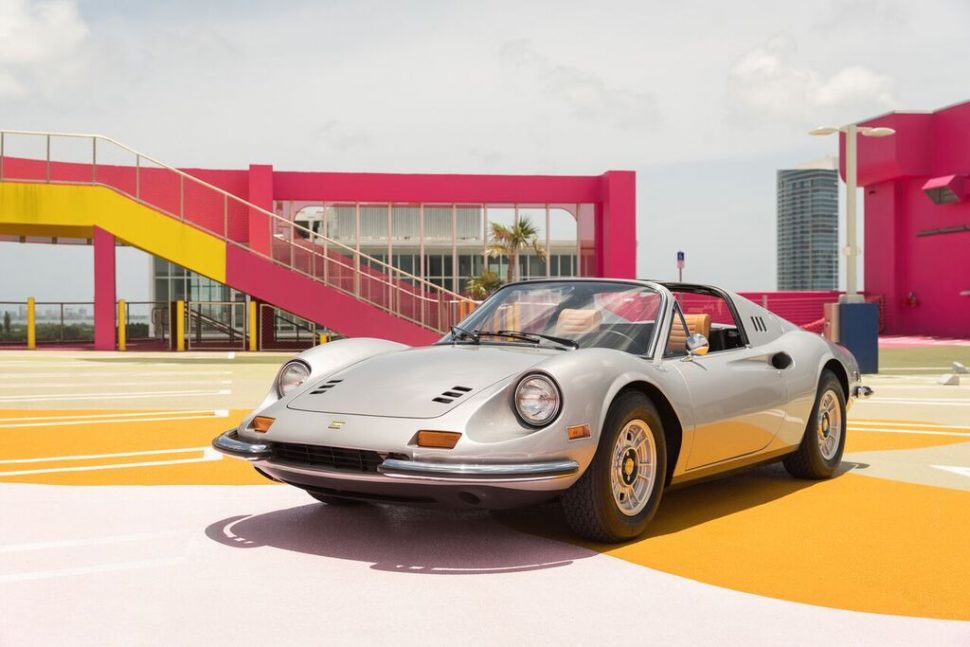 Among the most enduring and popular Ferrari models is the 246 GTS Dino. Named after Enzo Ferrari’s late son, Alfredo “Dino” Ferrari, who died in 1956 from a rare form of muscular dystrophy at the young age of twenty-four.

Enzo’s fitting tribute to his son who was the heir apparent to the family legacy was the 246 GT and GTS which was not branded as a Ferrari, but rather Dino, with Ferrari stepping out of its V12 comfort zone, the plucky Dino remains as one of the most loved Ferraris of all time.

The Dino range started with the 206GTs which were produced from 1967 to 1968.  The 206GT was very much a departure for Ferrari which made its name building big, screaming V12 sports cars.  On the other hand, the Dino was more along the lines of market competitors from Germany, namely Porsche, featuring a smaller sized car with a transverse mounted V6 engine.

The baby Ferrari was a hit and after listening to customers, Ferrari built them in record numbers to satisfy demand with the introduction of the 246 GT coupe from 1969 and GTS Spider from 1971 to 1974.  Ferrari answered demands for more power by adding a 2.4 liter V6 (246) engine with double overhead camshafts and three Weber 40 DNC carburetors producing 195BHP at 7,600RPM.

Dinos very much began the tradition of Ferrari building light-weight aluminum bodies with racing inspired fully independent suspension giving an almost go-kart like feel and ride.  In all, Ferrari built 1,274 (235 RHD) 246 GTS examples and they remain one of Ferrari’s most popular and enduring cars having been named number six in the lineup of the best all time sports cars of the 1970s by Sports Car Internationaland Motor Trendplaced the Dino at number seven of “Greatest Ferraris of All Time”.

In the market place, after languishing in the post-90s fall-off, Dinos made an incredible resurgence in the early noughties and have continued to perform at a very high level over the past decade with pristine examples regularly eclipsing the $500,000 (or more) mark.

Light weight, powerful, fun in a sexy package, the Dino with its pontoon front fenders and elegant lines is instantly recognizable as one of Ferrari’s most popular cars and they’re just as much fun to drive today as they were when new.

This 246 GTS Dino (#06278) has just 9,692 miles, is superbly restored by South Florida Ferrari specialist Greg Jones and comes with Classiche Certification which was completed in 2014.  Done in beautiful Argento (silver) with traditional tan interior and featuring Daytona seats with black inserts, this flawless turn-key Dino needs absolutely nothing and is ready to appear on the lawn at major Concours d’Elegance events and the open road.

“At Curated, we do not acquire cars simply for inventory but rather based on what the car is.  We love cars with interesting provenance, very low production, very low mileage, very special and often weird cars! ”   John Temerian, Jr.  Curated co-founder.