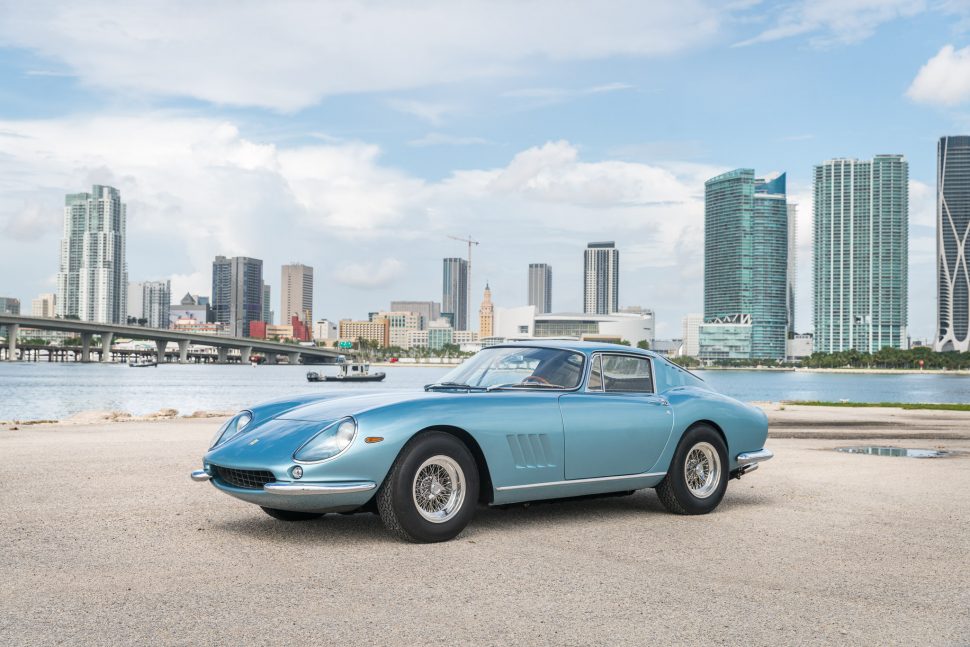 The highly distinguishable Pininfarina designed 275 GTBs still rank among the most popular Ferraris of all time.  With long, dramatic, sweeping lines, prominent four element side fins and pontoon front fenders, the 275 GTB was named by Motor Trend Classic magazine at number three of the top ten “Greatest Ferraris of All Time”.  Sports Car International named the 275 GTB/4 number seven on their list of Top Sports Cars of the 1960s”.

The coupé body was designed by Pininfarina and manufactured by Scaglietti.  The standard 275 GTB body was fabricated in steel with aluminum alloy doors, hood and trunk lid.  At least seventy-two cars were built with a lightweight all-aluminum body, which was an extra-cost option from the factory.

A series two, or “long-nose” version of the 275 GTB was introduced in 1966.  The second series 275 GTB incorporated a number of mechanical and cosmetic changes.  A torque tube was installed between the engine and transaxle in order to relieve stress on the drive shaft and central support bearing.  The engine and transaxle mounts were also revised to use two chassis attachment points each, rather than the four found on earlier versions.

The front bodywork was lowered and lengthened and the front air intake was reduced in size, which improved aerodynamic characteristics and reduced high-speed instability. This was the most visible change between the two series, resulting in the common informal designation of series I cars as “short nose” and Series II as “long nose.”  The rear window was enlarged to improve visibility.  In order to improve luggage space, the fuel filler, fuel tanks and spare tire were relocated and the trunk hinges were changed from internal to externally-mounted.

This 275 GTB, #08729, was originally delivered in July of 1966 to Alberto Morandi of Cremona, Italy, finished in Argento Metallizzato with Nero leather upholstery, and to European specifications with left-hand drive and metric instruments.  The car is one of eighty-eight 275 GTBs built in long-nose form with steel bodywork and three carburetors, and as a late-production model also features the desirable torque-tube driveshaft.

Subsequent Italian owners of the 275 GTB included Pierino Reali and Angelo Restelli, before the car was exported to the U.S. in 1974.  It spent most of its life thereafter in North America with a known succession of enthusiast owners, including H. Judson Holcomb, who exhibited it at the Ferrari Club of America Annual Meeting in May 1980; Bill Tracy of Virginia; and Fred Redell, Jr., who displayed the car at the Charlotte Motor Speedway in March 1985.  Later it was acquired in 1997 by the late Donald Mann of Franklin, Tennessee, a well-known and beloved enthusiast respected for his affable nature and the way he truly used his automobiles.  Mr. Mann was proud of the 275 GTB being a fit road automobile which was usually piloted to Ferrari Club events in far-flung locales under its own power.

The car was acquired by its next owner, Issam Karanouh, in 2005 and submitted to Bob Smith Coachworks, a well-known marque specialist, for a high-quality cosmetic restoration.  As part of this work the car was refinished in its current Blu Metallizato over light tan leather; much of the trim was refinished; all the weather stripping, hoses, belts and fuel lines were replaced; and the brakes and transaxle were rebuilt. Mr. Karanouh displayed the completed 275 GTB at The Quail in 2008, receiving the Pacific Tweed Courtier Eye for Style Award.

Well suited for both continued concours appearances and road rallies, the 275 GTB presents in absolutely beautiful condition throughout, both cosmetically and mechanically, and is offered with its set of owner’s handbooks, tool set and Borrani wire wheels, as well as a copy of its Ferrari build sheets.  It is a spectacular automobile with a profile as dramatic as its performance, sure to win the heart of a new caretaker, especially being a later, torque-tube model.